JAKARTA - As if there is no end. After the unfollowing movement was stirred up, Indonesian netizens are now busy attacking Dayana, who released a single song with the Kazakh musician, Hedo.

As of Friday, February 26 at 01.24 WIB, there were 30 thumbs-downs aka dislike. Meanwhile, those who like this video are only in the range of 4,600. This Hedo-Dayana video has been watched 283 thousand times.

From the video uploaded by YouTube Hedo Music on February 23, various comments were given. The point is they don't like Dayana, who has blocked the Instagram account of YouTuber from Pekanbaru, Fiki Naki, with over 3.6 million subscribers.

If you want to compare, the number of YouTube subscribers Fiki Naki with Hedo, Dayana's new friend, is like heaven and earth. Hedo is recorded to have more than 2 thousand subscribers. In the comments column there are more than 10 thousand talking about the singles Give Love Dayana and Hedo. An outburst of resentment dominated.

"Who has come all the way here to dislike it," said one of the comments given on the YouTube account of Hedo Music.

"Come here because of the pen (want) to dislike it, raise your hand," said another comment.

“How about Dayana? now you know how great the power of Indonesian netizens is, ”said the comment which also received dozens of thumbs up.

But many also commented in English. The point remains the same, telling Hedo that Dayana doesn't deserve to be invited to a duet.

"Hedo, so many talented young musicians around the world ... Wish you could find a better partner whose better personality ... And most important thing is know about how to respect," posted another comment.

The power of Indonesian netizens is really not playing. When Dayana was still victorious after meeting Fiki Naki, she had 2.2 million folowers. Look at today, there are 1.4 million followers left. 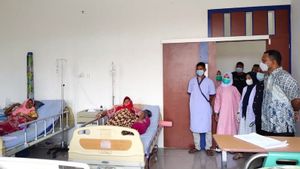