JAKARTA - Recently, there is a lot of excitement regarding the packaging of snacks or snacks with illustrations of Kaesang Pangarep on the food packages on Garuda Indonesia planes. The owner of the snack named TRICKS, namely PT Jaya Swarasa Agung Tbk or Tays Bakers (TAYS) finally opened their voices.

GK Hebat is a company in the field of food and beverage management since 2019, which is also an accelerator platform for SMEs. In the company, Kaesang served as CEO & Co-Founder.

"This new packaging is intended to introduce Tays Bakers in the retail market, considering the figure of Kaesang Pangarep who is close to Indonesian MSMEs," said Alexander Anwar, in a written statement, quoted Monday, January 17.

Alexander said that so far the market response to the new packaging has been quite positive. He also hopes that the presence of Kaesang in the TRICKS packaging will be able to encourage sales.

Tays Bakers has previously collaborated with PT Aerofood Indonesia (Aerofood ACS) for the past year, where Tays Bakers provided TRICKS products to Aerofood ACS for distribution purposes in various airlines that use Aerofood ACS services.

As for distribution on airlines, TRICKS products will be used with standard packaging without endorser illustrations.

"We will exchange all TRICKS products on Aerofood ACS with standard packaging," added Alex.

Tays Bakers is a manufacturer of quality and healthy snacks. The TRICKS Baked Crisps product with 5 authentic Asian variants which is one of the mainstay products, is the first in Indonesia and the world to be processed with the concept of oven-baked, made from real potatoes with less than 100 calories per sachet.

TRICKS products have been exported to foreign countries, such as ASEAN, China, Taiwan, Korea, Australia, the Middle East, to the United States.

"We will withdraw all snacks to avoid conflicts of interest," said Irfan to VOI, Sunday, January 16.

Irfan also confirmed that Kaesang's photo on the snack packaging did not have any purpose.

This response was conveyed after a scene of photos of food packages circulating on the Garuda Indonesia airline with one of the snack packages containing a picture of Kaesang's face. 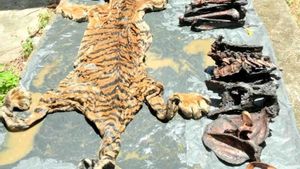