JAKARTA - The joint SAR operation on the search for the Sriwijaya Air SJ-182 aircraft was officially closed on the thirteenth day. Even though the integrated operation is stopped, the SAR team will continue to search.

Minister of Transportation Budi Karya Sumadi said that further operations would be moved, from previously at the JICT II Command Post, Tanjung Priok, to the post on Lancang Island, Seribu Islands.

Further operations on Lancang Island will be led by the National Transportation Safety Committee (KNKT), with the help of the SAR team from Basarnas, TNI and Polri.

"We are committed to continuing to make efforts and transferring the lead (command) to the NTSC to carry out further operations on Lancang Island," Budi said at the JICT II Command Post, North Jakarta, Thursday, January 21.

In this operation, the NTSC will focus on looking for a black box with a cockpit voice recorder (CVR) type that has yet to be found. Meanwhile, the black box flight data recorder (FDR) has been found since Tuesday, January 12.

"We hope that from the prayers of all of the people in this continued operation there will also be elements of assistance from SAR. So in the CVR search operation, we will also see if there is something, we will report it to Basarnas," said the Chairman of KNKT Soerjanto Tjahjono.

Meanwhile, the Head of Basarnas, Marshal Madya Bagus Puruhito, said that SAR members will also continue to look for body parts in this continued operation.

"In this case, if we find parts of the victim's body, of course the SAR members who are part of our team will immediately report and follow up," said Bagus.

Based on SAR operations from the first to the last day, the SAR team's findings totaled 324 body bags containing body parts or body parts. Then, as many as 119 aircraft materials, with details of 68 small bags containing aircraft debris and 55 large aircraft pieces. 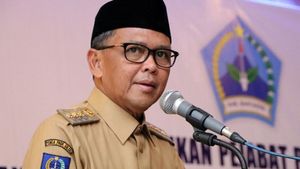