Cibeber Police, Cilegon Police managed to secure the perpetrator of the theft with a weight that occurred on the South Ring Road of Cilegon City, right in front of the gas station. Cibeber Police Chief Iptu Suhel said the perpetrator with the initials JR (28) was arrested along with evidence.

"The Cibeber Police Criminal Investigation Unit has succeeded in securing the perpetrators of the theft by weighting along with evidence in the form of 1 CPU for transmitting R4 Hino vehicles with Nopol: B-9310-TYY, 180 thousand in cash, and 1 Realme cellphone and a pair of scissors used by the perpetrators to pry out the car door," said Suhel in a written statement, Wednesday, November 30.

Suhel explained that the victim's initials WD (31), a resident of Ujung Tebu Village, Ciomas Serang District, at the time of the incident, had parked a Hino truck dump on the edge of the South Ring Road. After that WD ate at a shop not far from the truck he was parked.

When the victim approached his parked vehicle, WD found an unknown person getting out of his vehicle, then the victim chased him and caught him screaming thief, "explained Suhel.

Suhel also said that the perpetrator JR while fleeing tried to get into the Toyota Avanza car, which was suspected to be his colleague. But fortunately there were residents who managed to thwart it until the perpetrator was arrested.

As a result of the incident, the victim WD (31) suffered a loss of around Rp. 5,000,000 and the perpetrator, known as a resident of Cirebon, was subject to Article 363 of the Criminal Code with a maximum sentence of 5 years. 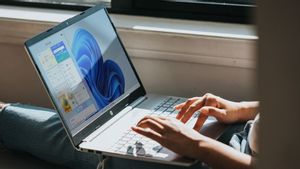 Use Banget! Here's How To Add Widget To Desktop Windows 11 After Beingburied By The Police, The Driver Of The Luxury Audi Collis Mahasiswi LEFT You