Quoted by Antara from the official PSSI website, Monday, January 11, Khairul carried the additional task because he was the only U-19 national team member who was fluent in Spanish.

Khairul helps colleagues, coaches and officials when having difficulty communicating with local residents.

He obtained this ability because the left-handed player played at the Spanish U-19 club Gymnastica Ceuta.

"I lived in Spain for a long time because of school and defending the club here," said Khairul.

Khairul Imam Zakiri has been in the Indonesian U-19 national team since 2019.

He always won the trust of coach Shin Tae-yong to strengthen the squad even though he did not always fill in the first eleven in several trials.

Khairul Imam Zakiri was also brought along when the U-19 national team conducted TC in Croatia starting at the end of August 2020 with a total of one assist.

In the TC in Spain, Khairul scored two goals during an internal U-19 national team match which made "Blue Team" beat "Purple Team" by a score of 2-1 at Complex Esportiu Futbol Salou, Spain, Sunday, January 10.

"Glad to score goals. We are here to always focus, be enthusiastic and continue to work hard to give our best," concluded Khairul Imam. 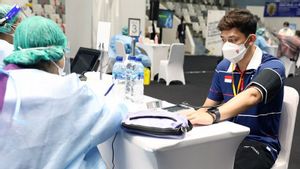 What's Wrong With The DPR RI? After Denial Of Closed Vaccination, Reporting To Photo Of Journalists Is Prohibited Don't Try It, Mutual Cooperation Vaccines For Companies Can't Be Purchased For Individuals