JAKARTA - PT Waskita Karya (Persero) Tbk has successfully negotiated with 21 banks and received full support for the debt restructuring process with a total credit facility of Rp29.2 trillion or 100 percent of the total restructured debt.

The Company's President Director, Destiawan Soewardjono, said that the restructuring process is part of the company's business transformation as stated in Waskita's 8 Streams of Financial Restructuring.

"The company fully appreciates the support from banks who have understood that this restructuring process will have a positive impact on the company's performance and in the future, it will also increase the confidence and optimism of all parties," said Destiawan in a written statement, quoted from Antara, Monday, September 20.

This agreement completes the process of signing the restructuring agreement of seven banks which has been implemented on August 25, 2021. Furthermore, on September 15, 2021, it will receive restructuring support from 14 banks.

Currently, these 21 banks provide loan extensions of up to 5 years and more competitive interest rates.

The company targets positive performance growth with an average CAGR growth of up to 25 percent in the next 3 to 5 years. In the first half of this year, Waskita Karya recorded a net operating profit of Rp33.4 billion, an increase of 102.5 percent compared to the same period in the previous year.

With the implementation of Waskita's 8 Financial Restructuring Streams, the company can continue to contribute to national economic growth, especially in infrastructure development in Indonesia. Golkar's 57th Anniversary, Jokowi Alludes To Government's Homework That Must Be Completed 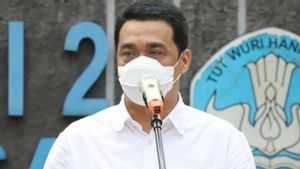 KPKP Research Results On Fish Containing Paracetamol, This Is The Response Of The Deputy Governor Of DKI, Ahmad Riza Patria Already Deposited IDR 4 Billion, This Entrepreneur Admits He Was Fooled By Mining Investments In Cirebon