JAKARTA - The Center for Volcanology and Geological Hazard Mitigation (PVMBG) said ejected material the size of ash from Mount Semeru in East Java could spread further depending on wind direction and speed.

PVBMG said the increased volcanic activity of Mount Semeru also presented other potential dangers, namely the ejection of incandescent rock around the peak and hot clouds of avalanches and rock avalanches from the dome/tip of the lava tongue to the southeast and south sectors of the summit.

"But until now the distribution and detailed glide distance cannot be ascertained", said the PVMBG statement quoted by Antara, Sunday, December 5.

According to PVMBG, the results of visual observations show that the avalanches and hot clouds of avalanches are caused by the instability of the lava tongue deposits.

According to PVMBG, the volcanic activity of Mount Semeru on December 1 and 4 was surface activity (secondary eruption) and the analysis of seismic data did not show an increase in the number and type of earthquakes associated with the supply of fresh magma/rock to the surface.

Based on the results of visual and instrumental monitoring as well as potential hazards, PVMBG stated that the activity level of Mount Semeru is still at Level II (Alert).

In the Level II (Alert) status, residents and tourists are asked not to move within a one-kilometer radius of the crater/peak of Mount Semeru and at a distance of five kilometers from the direction of the crater opening in the south-southeast sector.

Residents are also asked to be aware of the possibility of the emergence of hot clouds avalanches, lava avalanches, and lahars along rivers/valleys that originate at the peak of Mount Semeru, especially along the Besuk Kobokan, Besuk Bang, Besuk Kembar, and Besuk Sarat streams. 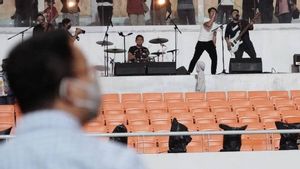 Exclusive, Political Money Is Hard To Erase, Jazilul Fawaid Affirms All People Must Have The Same Commitment Not For Presidential Candidates, This Time Volunteers Appeared To Support Anies For Two Periods As Governor Of DKI DPR Commission III: Indications Of Alleged Corruption At BPSDM Kemenkumham Must Be Proved