Busy Waiting For The Proposal Of A Prospective Husband, Dessy Ratnasari Is Ready When 'Matched' With Ridwan Kamil

JAKARTA - Chairman of the West Java National Mandate Party (PAN Jabar) Desy Ratnasari admits that he is ready if his party is appointed as a running mate for the West Java Governor, Ridwan Kamil in the 2024 West Java Regional Election. Dessy is ready to become a candidate for Deputy Governor Ridwan.

Dessy said that initially she was waiting for a future husband's proposal. But if the party chooses, he is ready to go forward.

"I am now even waiting for the proposal of my real husband. But as a cadre, I have to be ready in the end what the parties and other ketum decide to collaborate with PAN. Of course we have to be ready, "said Desy Ratnasari after meeting Ridwan Kamil with the PAN board members at the Pakuan State Building, Bandung, Friday, March 5.

Cadres must be ready to carry out what the party assigns.

"So roughly, it's suitable, teu is suitable, must be matched, if the Sundanese language is mah, so collaboration unless there is a personal matter is chosen, then it doesn't match, if the job of anyone paired with the party must be ready," he said again.

Desy admitted that until now he has not thought about the contestation affairs in the West Java Pilgub, considering that he is still focused on completing his duties as a member of the Indonesian Parliament.

"Currently we friends DPW PAN West Java must focus on the Sukabumi Fourth Election for legislators in the 2024 Pileg. The Election Law has not changed. This is our main focus," he said again. 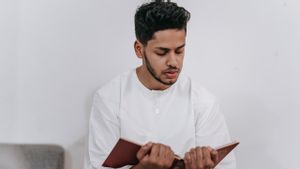 Harvest Reward! Here's An Easy Way To Finish The Qur'an In A Month