JAKARTA - The Indonesian Christian Party 1945 (Parkindo 1945) hopes that the Minister of Law and Human Rights (Menkumham) Yasonna Hamonangan Laoly responds to a letter requesting clarification regarding the ratification of the change in Parkindo 1945's name to the Indonesian Student Party. said that the response needs to be accompanied by an attachment of a document ratifying the name change in the form of a Decree (SK) Menkumham Number M.HH-5.AH.11.01 2022 and documents that have been verified by the Ministry of Law and Human Rights. official document as a form of public disclosure of information on the change in the name of our client's party (Parkindo 1945). We hope that the public information that is the right of our client will not be covered up," said Mendrofa in a written statement received in Jakarta, Wednesday, May 25. The change in the party's name, according to him, is a form of openness Public formation from the Ministry of Law and Human Rights as mandated by law. Mendrofa expressed his hope in response to Yasonna's statement that invited Parkindo 1945 to sue the State Administrative Court (PTUN) if he found data changes that did not match. Yasonna conveyed that all changes made by the Ministry of Law and Human Rights were in accordance with Previously, the letter of request for clarification was given directly by the attorney general team of the Secretary General (Sekjen) Parkindo 1945 Max Melen Tumondo together with the party's DPP management to the Directorate General (DG) of General Legal Administration (AHU) Kemenkumham, Monday 23 Mei.Mendrofa said that they understand that they can take legal steps to file a claim at the Administrative Court. In fact, when met at the Directorate General of AHU, he said that Parkindo 1945 would file a lawsuit to the Administrative Court if within seven days there was no response from the Menkumham. Even so, Parkindo 1945 hoped that the Menkumham could provide a response and fulfill their right to obtain public information disclosure. here do not accuse or suspect Menkumham. We believe Kemenkumham work professionally, but we also hope Menkumham provide that information, "he said. Results Of 3 Months Of Operation, Police Arrest 22 Drug Dealers With Evidence Of 32.5 Kilograms Of Meth And Marijuana BNI Hopes There Are No More Hoaxes About Credit Distribution Spreading In 22 Provinces, The Government Sets A Certain Emergency Status For Livestock PMK 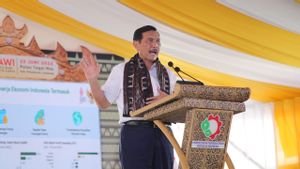