Jokowi: If There Are Still Those Who Are Not Satisfied With The Job Creation Law, Please File A Complaint With The Constitutional Court

JAKARTA - President Joko Widodo (Jokowi) has invited all parties who disagree with the Omnibus Law on Cipta Kerja to submit a judicial review to the Constitutional Court (MK). Not holding a demonstration that ended in chaos.

"If there are still parties who are dissatisfied with the Job Creation Law, please submit a judicial review to the Constitutional Court (MK)," Jokowi said as quoted from Youtube of the Presidential Secretariat, Jakarta, Friday, October 9.

Previously, the Constitutional Court (MK) was ready to accept and process claims filed by the public regarding the Job Creation Law.

Previously, the Indonesian Parliament officially passed the Work Creation Omnibus Law Draft (RUU). Approval was taken at the Plenary Meeting for the Closing of Session Period I of the 2020-2021 Session Year at the Parliament Building, Senayan, Jakarta, Monday, October 5, chaired by Deputy Speaker of the DPR Azis Syamsudin.

Understanding the many rejections in society regarding this law, Azis Syamsuddin then asked if there were groups of people who felt the need to file a judicial review regarding the Job Creation Law and said that this kind of thing was not new. This is because there are many legislative products produced by the DPR that have experienced similar things. 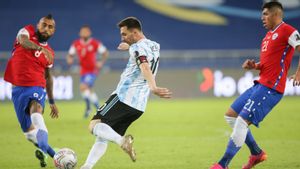 Argentina Starts Adventure In Copa America 2021 With A Draw NATO Calls China A Systemic Challenge, Stoltenberg: We Must Be Ready Kiky Saputri Roasted: Erick Thohir Is A Bit Difficult To Become President Because Pak Jokowi Is Rumored To Have 3 Terms Paulo Sousa Highlights Poland's Omissions In Defence: We Shouldn't Have Lost In This Way