JAKARTA - Countries that are categorized as low gross domestic product or categorized as poor are considered the most vulnerable to the impacts of climate change in the future.

This was revealed by the Minister of Finance (Menkeu) Sri Mulyani when she was a keynote speaker at the ESG Capital Market Summit seminar held by the Indonesia Stock Exchange (IDX).

According to the Minister of Finance, the issue of climate change is as important as the COVID-19 pandemic because no country can be free from its impacts.

As an example, she explained that if a country is not prepared in terms of its health system, fiscal capacity, and the ability to obtain vaccines, it will be under the most pressure.

"Climate change is also the same, poor countries may get a much heavier impact because they are considered not to have adequate readiness", he said, Tuesday, July 27.

For this reason, all countries in the world, called the Minister of Finance, are trying to overcome the impacts of climate change along with the increasing use of natural resources.

"Indonesia as a large country in terms of geography and population, and is included in the G20 group, then we will definitely be one of the determinants of the development of climate change issues", he said.

Because of this potential, Indonesia must play an active role in dealing with environmental issues so as not to be influenced by the policies of other countries.

"We must be able to show readiness efforts so as not to be dictated to, but instead to form a new global order", said Minister of Finance Sri Mulyani. 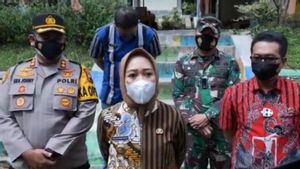