Agus Salim answered briefly, "Maybe it has reached Arafah where we must always pray to Allah."

HOS Tjokroaminoto is a National Hero. Known as a professor because he has become a teacher for movement figures in Indonesia. These include Soekarno, Semaoen, Muso, Alimin, and Sekarmadji Maridjan Kartosoewirjo.

The hijrah for him is to move from bad places to better places so that it can become a axis of fire that makes people light up. Even when accompanying his wife, Suharsikin before death, the National Teacher again said the word hijrah.

"My hijrah this time will be smooth," said Tjokroaminoto.

Hijrah, according to the Director of Strategic Police, M Subhan, is not only a religious text. The hijrah is a social, cultural, and political terminology.

Look at the current condition of Indonesia. Since the last hijrah in 1998, this nation has not been able to realize complete reforms. Eradicating corruption, collusion, and nepotism is just a slogan.

Democracy is not discussed for political civility. Democracy is only used as a vehicle to fight for power, not to empower and prosper the people.

After five presidents came to power, the country's problems remained unchanged: noisy politics, a shaky economy, the law as if fair, corruption failed to be eradicated, morality is worrying, the nation has no character, and much more. That's a portrait of the current generation," Subhan said in his book, the Dead Nation is in the hands of a politician.

On August 19, 2022, the Chancellor of Lampung University, Karomani, was caught by the Corruption Eradication Commission (KPK) Hand Catching Operation (OTT). Karomani allegedly asked for some money from parents who wanted their children to become Unila students through the Mandiri Selection line.

It's sad, sad, as well as concerning. The Chancellor or educator who should be a role model actually does something that is not educated. Far from the values of education," said Subhan.

Then, in early September 2022. A total of 23 convicts of corruption were released. Including, former Pinangki Prosecutor Sirna Malasari, Queen Atut Chosiyah, and Zumi Zola. This, said the former Deputy Chairman of the Corruption Eradication Commission (KPK) for the 2014-2019 period, Saut Situmorang, signifies corruption as not being considered an extraordinary crime.

Even more sad, when Supreme Court Judge Sudrajad Dimyati was dragged into the bribery case in case management at the Supreme Court on September 23, 2022. Judges and court officials as law enforcement officers who should enforce the law are actually dragged into legal cases. So where else are the people looking for justice?

President Jokowi as Head of State must immediately act on the arrest of the Supreme Court. Because, this can become an issue, not only shocked the people in the country, but also internationally," Gayus said in his writing, the State in the Emergency State of Justice and Emergency Civilization of Law.

The Chief Justice of the Supreme Court, Syarifuddin, admitted that he was disappointed. This is certainly the right moment to strengthen the commitment to upholding the law and justice as straight as possible.

We are all saddened, disappointed, furious by this incident. This is a disaster we never imagined before. However, this sadness, sadness, disappointment should not make us negligent, but must make us look forward. We must be good at taking lessons from this disaster," Syarifuddin said in a written statement quoted from the official website of the Supreme Court on September 26, 2022.

He asked the special unit of the Supervisory Body in the Supreme Court to carry out surveillance as often as possible. According to him, this is to increase early supervision to prevent unwanted things.

"I want us to be sincere, sincere, with our own will, with a genuine determination to comply with the code of ethics for the judge's behavior," he stressed.

The following is a script for the Integrity Pact which is read together:

With this stated in fact that:

In the era of Tjokroaminoto, the leaders of the people competed to sacrifice for the nation. Now on the other hand, the leaders are actually competing to profit from the position and authority they hold. The commotion of the nation today always revolves around its leaders.

"Apparently, we are not really hijrah," said Subhan in his book. 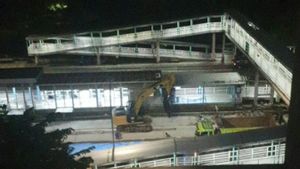