JAKARTA – In the midst of the eradication of illegal online loans (pinjol) in Indonesia, the Chairman of the Investment Alert Task Force (SWI) Tongam L. Tobing revealed that the loan received 34 percent of funding from foreigners.

The data was obtained by SWI from data from the Ministry of Communication and Informatics. In addition, illegal lenders operating in Indonesia also have servers abroad, from Singapore, India, to China.

"From outside to be distributed in Indonesia. The perpetrators control from abroad," Tongam said as CNBC on Tuesday, October 26, 2021.

He also explained that last June there were only about 22 percent of borrowed servers in Indonesia. Meanwhile, 40 percent of their origins are unknown due to their activities through social media, and the rest are from abroad.

The police also suspect that the illegal borrowing funds came from abroad. This is based on gathering information from illegal lenders who have been arrested.

The police are also conducting an in-depth investigation of the pinjol's movements in order to carry out an investigation. This was conveyed by the Director of Special Economic Crimes Brigadier General Helmy Santika.

The illegal borrowing funds are suspected to have come from abroad, but there are also allegations that the funds came from within the country. Brigadier General Helmy also explained that his party found remittances or remittances from abroad after an investigation was carried out. From these findings, remittances only carry out storage activities.

“Because of some of the investigation activities that we have carried out, some are as remittances, legal based on Bank Indonesia. However, the task of sending and receiving authority does not save. We have received the fact that in addition to sending and storing remittances, further investigation is being carried out," said Helmy at a press conference on Monday, October 25, 2021. 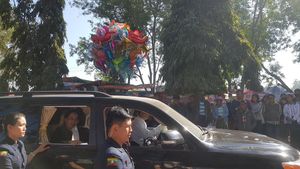 Tomorrow, Aung San Suu Kyi Will Face The First Verdict Hearing On A Series Of Charges Against Her Calls Russia's Allegation Of Aggression False, Kremlin Hopes President Putin And President Biden To Talk Before The End Of The Year