JAKARTA - Emoji are image characters that we often use when expressing our moods. Every time we exchange messages, we don't forget to spice it up with emojis.

This time we will discuss the top 10 most used emojis in 2021. According to the Unicode Consortium, the emoji lineup has not changed since 2019.

The Tears of Joy (😂) emoji are again dominating the emoji lineup this year, accounting for five percent of all emoji usage, even though many Gen Z find it pretty uncool.

Citing Engadget, Friday, December 3, uniquely, this emoji is also the top emoji in 2019 and the most tweeted last year. The Unicode consortium states the only emoji that comes close to the popularity of Tears of Joy is Red Heart (❤️).

Then, the rest of this year's list of 10 most used emojis, most of which have positive vibes, are Rolling on the Floor Laughing (🤣), Thumbs Up Signs (👍), Loudly Crying Face (😭), Folded Hands or prayer emoji. (🙏), Face Blowing a Kiss (😘), Smiling Face With Three Hearts (🥰), Smiling Face with Heart-Shaped Eyes (😍), Smiling Face with Smiling Eyes (😊).

It seems that the emojis above are selling well in the last three years because they are enough to describe the mood. The top 100 emojis account for about 82 percent of the total emoji shared, though there are over 3,600 to choose from, not to mention those on Gboard.

However, the least popular category of emoji is the flag. The country's flag is used the least, although there are more emojis in that category than any other.

Unicode says this data helps it know where to focus when it comes to adding more emoji and also reminds those submitting proposals to read the Unicode guidelines first. This Is The Complete UFC 270 Match, Duel Francis Ngannou Vs Ciryl Gane 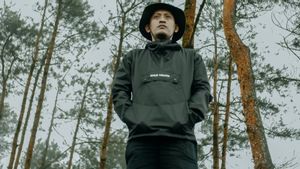 More Comfortable Being A Soloist, Ex-Stars And Rabbit Guitarist Adi Widodo Releases The Song Stay On Me As Long As You Fulfill These Requirements, COVID-19 Patients With The Omicron Variant Can Isolate At Home Viral Again, Old Video Of The SO7 Ambassador Singing At The Bride's Celebration With A Simple Sound System Halim Airport Is Closed, What Happens To The Private Jet Of The Super Rich? Here's The AP II Settings