Who Is The Creator Of Shiba Inu (SHIB) Who Calls Himself Ryoshi?

JAKARTA – Many are wondering who is the creator of Shiba Inu (SHIB)? The question is understandable, because the popularity of SHIB is increasing. That's because the price of the Shiba Inu token can skyrocket for days and manage to attract new investors.

Unmitigated, the performance of the SHIB price increase could penetrate 100.4 percent in one week, and 829.1 percent in the past month, as reported by data from Coingecko.

Due to this increase, the Shiba Inu token has now overtaken Dogecoin, ranking ninth based on its market capitalization. The token which is claimed to be the “Dogecoin Killer” is reportedly being burned.

The developer also managed to launch an NFT named Shiboshi after successfully releasing ShibaSwap together with the SHIB family tokens namely LEASH and BONE. Information related to the Shiba Inu ecosystem is often conveyed by the Twitter account @ShytoshiKusama. However, who is the central figure behind the Shiba Inu crypto?

The Creator of Shiba Inu Doesn't Have a Single SHIB Token

The creator of Shiba Inu is a mysterious figure who calls himself Ryoshi, which means fisherman. Ryoshi created the Shiba Inu token in August 2020. However, Ryoshi admitted that he was not an important person. Besides, the information regarding Ryoshi only stopped here.

In writing on the Medium platform, Ryoshi considers that information about him is not that important and he is a nobody. If anyone tried to reveal his identity, it would only end up disappointing.

"I've said from the start, I'm nobody, I'm not important. Attempts to dismantle my "identity", even if successful, will be disappointing. I'm just a non-consequential guy typing on a keyboard and I'm replaceable. I'm Ryoshi," he wrote on Medium.

In addition, Ryoshi also admitted that he did not have any Shiba Inu tokens, even though the price had skyrocketed. He wrote that many people thought he was already a billionaire, but in fact “until today I have 0 SHIB.”

He also revealed the reason. If he had a SHIB token, Ryoshi wouldn't be able to be what he is today. Ryoshi also revealed that SHIB holders don't have to worry even if he doesn't have any Shiba Inu tokens.

"Don't worry, the great Shiba will reward me in another way," he wrote.

“SHIB is SHIB. Just that. Whoever comes and respects Shiba goes along with me.”

"So the reason I'm writing this (perhaps philosophically) message is to prepare you, loved ones for the inevitable and present a vision of the future to carry forward as a decentralized community," he added.

The creator of Shiba Inu is as mysterious as the creator of Bitcoin Satoshi Nakamoto. Until now, the popularity of SHIB has skyrocketed, the SHIBAMY community has also become more closely united after Elon Musk answered that he does not hold the SHIB token. Musk's answer made the price of SHIB drop 20 percent, but only temporarily, after that SHIB skyrocketed again. Cray X, A Tool That Detects The Level Of Worker Fatigue When Lifting Goods Watch Out! DPD Reminds Debt Interest Has Doubled To Rp405 Trillion This Year 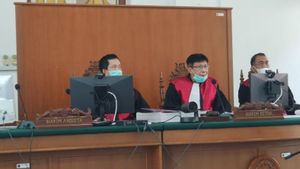 VIDEO: Ray Sahetapy Concerning The Archipelago As The Capital Of The State Part 2: From The Ancestors Guarded By Brimob Nusantara, Security At Yalimo Papua Is Conducive Ahead Of PSU