JAKARTA - TikTok is in trouble again. The Dutch Data Protection Authority has just issued a fine of 750,000 euros or equivalent to IDR 12.7 billion against the creative video application, because TikTok is claimed to have violated the privacy of children in the Netherlands.

The authority noted that information on installing the TikTok application in English was not easily understood by young Dutch people.

"By not providing their privacy statement in Dutch, TikTok fails to provide an adequate explanation of how the app collects, processes and uses personal data", the DPA said as quoted by ABS-CBN News, Friday 23 July.

"This is a violation of privacy laws, which are based on the principle that people should always be given a clear idea of what to do with their personal data", he added.

Meanwhile, the DPA stated that TikTok objected to the fine. TikTok told AFP its privacy policy is a shorter and more accessible summary for younger users, it's also available in Dutch since July 2020.

"The Dutch Data Protection Authority has accepted this as a solution to this problem", TikTok said.

In May, the European Union asked TikTok to address concerns about aggressive advertising methods targeting children in cases launched by consumer authorities in several member states.

TikTok has faced many such cases globally, and the EU's claim comes a month after Britain accused the video-sharing app of illegally collecting personal data from millions of children in Europe. The case by the EU executive comes after signals in February by the European Consumer Organization (BEUC) about alleged violations of EU consumer rights by TikTok. Worse Than Garuda Indonesia, AirAsia Turns Out To Be More Destroyed Due To Loss Of IDR 84 Trillion In Semester I 2021 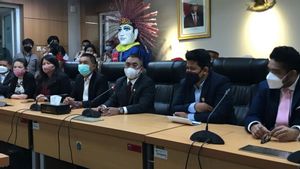 Plenary Formula E Only Attended by PDIP and PSI, Gembong Says There is a Threat of Dismissal if Participating in the Meeting Ahead Of The Dismissal Of Novel Baswedan Et Al, Febri Diansyah: The President Should Not Let Go Robbery In Cilandak, Martabak Builders Don't Dare To Fight Because His Neck Is Wrapped With Sickles How To Watch The G30S/PKI Betrayal Crackdown Film LPI Commander Not Suspect In Persecution Case Muhammad Disappointed, This Is The Police's Reason Good News From Erick Thohir, He Will Open Sarinah Building In March 2022