JAKARTA - TikTok seems to be looking for trouble, the company is now claimed to be fined £27 million or equivalent to IDR 440 billion by British regulators.

The fine began during an investigation by the Information Commissioner's Office (ICO), in which TikTok was found to have failed to protect children's privacy.

TikTok allegedly violated data protection laws between May 2018 and July 2020. Therefore, the ICO warned TikTok in advance of the amount of fines the company had to pay.

The maximum fine that the ICO can incur will be based on a calculation of 4 percent of TikTok's global annual turnover.

According to the ICO, China-based video app ByteDance may have processed the data of children under the age of 13 without parental consent. They also fail to provide information to their users in a way that is easy to understand.

In fact, TikTok is also claimed to process data of special categories such as information on a person's race or ethnicity without any legal basis.

“We all want children to be able to learn and experience the digital world, but with the right data privacy protections. Companies that provide digital services have a legal obligation to implement such protections, but our provisional view is that TikTok does not meet those requirements," UK Information Commissioner John Edwards said in a statement.

Now, TikTok has 30 days to respond to the investigation and the fine. If the company can provide the right reasons, then the ICO can reduce penalties or not impose fines at all.

"While we respect the ICO's role in maintaining privacy in the UK, we do not agree with the initial views expressed and intend to formally respond to the ICO in due course," explained a TikTok spokesperson.

The ICO began investigating TikTok in February 2019 after the US Federal Trade Commission (FTC) imposed a $5.7 million fine for violating the privacy of underage users.

At the time, British regulators were concerned about TikTok as a truly open platform and its transparency tool. In fact, sexual predators were found to message users as young as eight, and it was relatively easy for children to cross the age limit on the app. Recommended Websites to Download Applications Safely Besides the Play Store 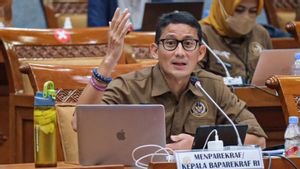 Often Used As "Pain Killer", This Is A Ethyl Chloride Effect If Sputtered To The Skin