Unique NFT It's Nothing Revealed, What's In It?

JAKARTA – Recently, the NFT world is buzzing with several unique collections of NFT. These NFT collections can be said to have never been thought of at all and are completely different from other NFTs such as Bored Ape and CryptoPunks. Some of the unique NFT collections carry the free-to-mint concept. One of them is NFT It's Nothing.

This free to mint NFT has finally revealed and released its NFT collection. However, it cannot be called a collection because it contains absolutely nothing or nothing at all or is empty. Completely empty. If you look at the NFT marketplace, OpenSea, the collection only lists the NFT name, It's Nothing. Created by a creator named We_are_nobody with the description “Time to reset. Everything starts from nothing...”.. Even so, this NFT has been verified and occupies the top column in OpenSea along with other blue-chip NFTs.

Reporting from NFT Evening, It's Nothing was released on June 23 last. Like other free-to-mint NFTs, this project doesn't promise anything or show their roadmap. Even before releasing NFT, they just said something was coming on June 23, it was free-to-mint and it's nothing. If you look at the web page, it's just a white screen with a reset button in the top left corner and a choice of language in the top right corner. While underneath, written narration or sentences that run as they are typed.

However, the NFT collection sold out a day after its first release from its public sale. Currently, the floor price of It's Nothing is at 0.002 ETH with a total volume of 587 ETH or about 662 thousand dollars. A big number for something that has no content.

Recently, the It's Nothing project released a video overlay on Twitter and its website. The narrative is quite long but interesting such as “NFT space is meant to build a new world, many promises end up being fruitless, projects without a roadmap, let's reorganize, starting from scratch, towards a better future together”. They also say that this project is a start and that later collectors will control how they shape their own space.

After its release, of course, there were many reactions to this NFT It's Nothing. Some Twitter users refer to it as a "perfert rug". There are also those who say that they have seen the same thing as It's Nothing before.

ArtCats.eth, another NFT creator, tweeted, “However, with our project clearly defined, purposeful, mission, roadmap and carefully planned, we still have to seek support from collectors. I mean, when a project like It's Nothing sells out, we wonder, is what we're doing wrong?”

The presence of It's Nothing is quite shocking the world of social media. Furthermore, will Its' Nothing stay like that? Or as in its overlay which states it will let the community carry on? Crypto Airdrop: Definition, Type, And How To Get It Scientists Find A Way To Make Iron On Mars, Without Having To Be Sent From Earth 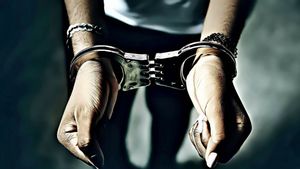 Inspector General Ferdy Sambo Charged With Article 340 Of The Criminal Code With The Death Penalty, What's In It? In Romantic Relationships, Here Are The Reasons Why Every Couple Needs Emotional Adjustments Concerning The Controversy Over The Transformation Of The Hospital Into A Healthy Home Made By Anies, The Deputy Governor Of DKI Asks Not To Worry About