JAKARTA – Well-known brands are starting to enter the world of Web3 and NFT today. One of them is Gucci, a famous fashion brand from Italy. Gucci wants to bring a new store concept to meet the future, according to the name of the collection, “The Next 100 Years of Gucci”.

Gucci partnered with SuperRare, one of the NFT marketplaces for this collaboration. The famous brand has started to enter the world of Web3 and brings its own uniqueness with SuperRare. The collection is currently accessible via Gucci Vault on its website. The Gucci and SuperRare partnership came after Gucci secured $25,000 worth of RARE tokens for joining SuperRareDAO.

This collaboration is a vision of the past and the present. Gucci itself was founded in 1921. In 2022, Gucci's movement into the NFT world is a new breakthrough. The auction is a manifestation of a long-standing vision of introducing brands and products to a wider and more advanced reach in terms of technology. The auction took place in the Vault Art Space with an innovative display.

Reporting from NFT Evening, Vault Art Space displays a collection of works from 29 selected artists. These works were chosen because they are diverse and innovative. Some of the names of artists included in Vault Art Space are Pet Liger, VEXX, eBoy, Sasha Katz and several others. The exhibition is the work of Alessandro Michele, who also created the kaleidoscope narrative for Gucci.

On its website, Gucci states that the Vault Art Space invites 29 artists and works that reflect Gucci's history and views on what the future holds. Works are screened and selected by curators from a multifaceted perspective, things that happened to Gucci in the past and now serve as suggestions for its future.

The exhibition is now available, the works of the artists can be purchased through auction. There are three drops in total. The first drop runs from June 23 to July 1. The second and third drops are expected to take place between 7 and 29 July.

Gucci's Investment in DAO and Its Digital Brand

After being successful in the NFT world, Gucci is now venturing into DAO (decentralized autonomous organization). They chose to join the NFT SuperRareDAO marketplace. Gucci has also purchased $25,000 worth of RARE tokens.

This was a unique partnership and Gucci became the first fashion brand to join the DAO. In addition, due to the purchased tokens, this well-known brand has governance rights within the SuperRare community.

Not only that, despite the announcement of working with SuperRare, Gucci has worked in several parts of web3. For the record, on June 21, they applied for several trademarks to protect their digital assets including the Gucci image and logo for NFT and metaverse. 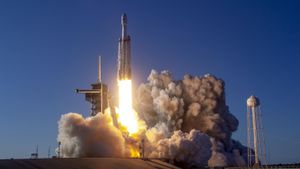 Deolipa Claims That Bharada E Intervened, The Letter Of Revocation Of Attorney Was Considered Odd Ganjar Asks Investment Companies To Routinely Conduct Outreach: So No One Is Trapped More Police Are 'Detained' In Special Rooms, Kabareskrim Once Promises To Criminalize The Obstruction Of Investigation On The Murder Of Brigadier J