There Are 12.4 Million Crypto Investors In Indonesia, The Increase Is Predicted To Continue

JAKARTA - Indodax CEO Oscar Darmawan believes that the trend of increasing the number of crypto asset investors in the country, as the latest data from the Commodity Futures Trading Supervisory Agency (BAPPEBTI) of the Ministry of Trade, will continue.

Based on the latest data from the Commodity Futures Trading Supervisory Agency (BAPPEBTI) of the Ministry of Trade, the number of crypto asset investors in Indonesia in February 2022 reached 12.4 million investors.

According to Oscar, this is an impact that blockchain technologies such as crypto, DeFi and NFT are increasingly needed.

"It is not impossible, the increase in investors will also continue to rise again this year. Moreover, the government has also been very open to the adoption of crypto as a digital commodity which is highly considered," he said, quoted by Antara, Saturday, April 2.

Oscar continued, the data proves that Indonesia has placed crypto as an increasingly mainstream commodity. Its adoption even beat Singapore, which is in eighth place in Southeast Asia.

Not only the openness of the domestic ecosystem, he added, the positive world sentiment has also influenced the crypto investment trend to some extent. For example, some countries have relaxed their crypto usage policies.

According to him, the recent regulations of various countries have made crypto sentiment shift in a positive direction. First, there is the Brazilian capital, Rio de Janeiro which will allow its citizens to pay taxes using crypto, and has plans to allow other payments using crypto.

The second is the Deputy Prime Minister of Vietnam who is instructing the creation of a Bill related to crypto. Third, the UK Government is also planning to release new rules that focus on stablecoins due to its massive growth in recent times.

News about the Russian Prime Minister who is trying to legalize crypto after the destruction of the value of the currency due to sanctions from Western countries due to the Ukraine-Russia war. The states of Colorado and Florida, which will soon accept crypto for tax payments, and the modernization of regulations around digital assets by the president of the United States, Joe Biden have also given fresh air to the market in recent days.

"Not only that, Terraform Labs' institutional investors are also reported to have just bought a fantastic amount of Bitcoin. What Terraform Labs has done is enough to increase the price of crypto and provide a positive catalyst for investors," added Oscar.

With the regulatory trends occurring in some of the countries above, it proves that more and more countries in the world are competing for crypto adoption.

"In fact, I predict that in 2022 there will be many countries following El Salvador to adopt Bitcoin and other cryptocurrencies as a means of payment and the country's foreign exchange reserves," he said.

Recently, the crypto entered a green market rally for several days. After previously being in the red zone, the crypto market has shown its peak in the last few days starting with the increase in the price of Bitcoin.

Oscar assessed that the last few days crypto investors, especially those investing in Bitcoin, were quite happy to see the price of Bitcoin rallying green for several days. As of Today, BTC is up 0.06 percent.

However, if it is calculated within a week, the Bitcoin price increase is approximately 20 percent and during this week the highest Bitcoin price was at 690 million on March 29, 2022.

"Usually if the price of Bitcoin is green, the majority of other crypto asset prices will also be green. And vice versa," he said. Huawei Has A New Strategy To Launch 5G Phones Next Year, Don't Be Afraid Of US Sanctions! The Samsung Lifestyle Smart TV The Sero Price Could Be A Suitable Choice For The DPR RI Which Budgets Rp1.5 Billion For 100 Televisions 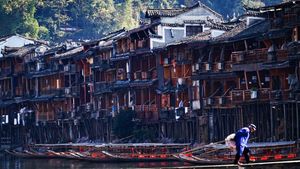