JAKARTA - Olivier Giroud led AC Milan to beat Torino 1-0 with his only goal in the tenth week of the Italian League match at the San Siro Stadium, Tuesday local time.

Launching Antara, the goal scored by Giroud in the 14th minute also brought Milan temporarily up to the top of the Italian League standings with a collection of 28 points.

While Torino, who suffered a third defeat in the last four games, dropped to eleventh with a collection of 11 points.

Six league wins on the spin: our write-up of #MilanTorino 👉 https://t.co/k5LEsyJx98

The first half match was not colored by many dangerous opportunities and the only golden opportunity that was created by Milan was able to be used by Giroud into a goal in the 14th minute.

Starting from a corner that Milan got in the match, the ball was passed with Rade Krunic's cross header which headed into the far post area where Giroud met it with a perfect flick to open Milan's advantage.

Since that goal, Torino have actually appeared more aggressive to hunt for a return goal, unfortunately none of their 12 attempted shots throughout the match was able to produce results.

Il Toro's best chance came in the 76th minute when Antonio Sanabria burst into the box and fired a shot past goalkeeper Ciprian Tatarusanu.

However, the ball that almost went into the goal was chased by Simon Kjaer before the dangerous situation was controlled by the aging defender, the captain of the Danish national team.

Then in the 85th minute Dennis Praet grabbed a wild ball which unfortunately bounced off the field and ended up soaring over the crossbar.

In the fourth minute of injury time Torino goalkeeper Vanja Milinkovic-Savic helped his team-mates in a corner kick and was able to head the ball towards Sanabria, unfortunately he failed to duplicate Giroud's goal and the score 1-0 for Milan lasted until the final whistle.

Milan next travel to the Olimpico against AS Roma on Sunday (31/10), a day after Torino host Sampdoria at the Olimpico Grande. Jonatan Christie Raises Funds for Semeru Victims, Natizen: Jojo is a Good Man, May You Always Be Given Sustenance By God 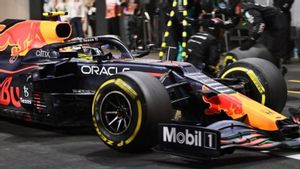 Verstappen Says He Was Responsible For The Collision With Hamilton KSP Moeldoko: It's Time For Indonesia's Electric Vehicle Industry To Be Independent The Shooting Case At The Bintaro Toll Exit, Begins With The Investigation Of A DKI Provincial Government Official And A Woman The Body Of Woman Allegedly Pregnant Found In Mokevart Cengkareng