Serbian media reported that the Swede was insulted by someone sitting in the VIP area of the Red Star stadium during the match on February 18.

In that match, Ibrahimovic was indeed on the bench, but did not play until the match ended in a 2-2 draw in Belgrade.

However, the spotlight caught a supporter who made fun of the ethnic Ibrahimovic from Bosnia-Herzegovina.

"An Ethics and Disciplinary Inspector has been appointed today to carry out a disciplinary investigation into the incident which occurred during the 32nd round of the UEFA Europa League," UEFA said in a statement quoted by Antara from Reuters.

Red Star issued an apology to Ibrahimovic in a statement last week.

They said they would work closely with the authorities to identify the perpetrators. 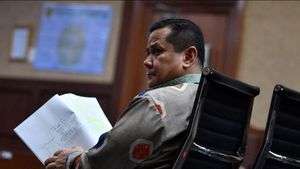 Dealing With The Police 5 Times, Grandpa In Sampit Threatened 20 Years In Prison This TikTok Model OnlyFans Account Was Blocked, Even Though It Was Only Posting Lunch Videos