Giroud's Acrobatic Goals Differentiate The Match Between Atletico And Chelsea

JAKARTA - Olivier Giroud's acrobatic goal led Chelsea to win the first leg of the Champions League last 16 with a score of 1-0 over Atletico Madrid at the National Arena Stadium, Bucharest, Romania, Wednesday, February 24.

Giroud broke the deadlock in the 68th minute with an acrobatic finish that beat goalkeeper Jan Oblak.

Launching Antara, Referee Felix Byrch initially annulled the goal because of alleged offside. However, after consulting with VAR he finally confirmed Chelsea's lead.

Atletico almost got a windfall when Saul Niguez was able to close the pass by goalkeeper Edouard Mendy. Luckily for Chelsea the bouncing ball did not go to the goal and was able to be removed by Marcos Alonso.

Then in the 15th minute, Luis Suarez is able to steal the ball from the control of Antonio Ruediger to send a tug which is tried to be completed by Thomas Lemar at the far post area. However, pressure from Callum Hudson-Odoi sent the finish off target.

The two missed opportunities represented Atletico's game which was unable to meet a single target in the only six attempted shots they fired throughout the match.

In contrast, Chelsea were quite daring, dominating 63 percent of the ball and doing better in trying to finish their chances in the final third of the pitch.

We've passed the hour mark in Bucharest. The Blues continue to dominate possession but haven't found a way through this organized Atletico defense. 🔴 0-0 💠 [62 '] #ATMCHE pic.twitter.com/0L9hKdUdIY

In the 25th minute, for example, Alonso was able to grab a throwing ball resulting from an imperfect sweep of the Atletico defense, lucky for Los Rojiblancos his shot was still secured by Oblak.

Oblak also made another save when he was able to deny Timo Werner who had pushed into the penalty box trying to finish Mason Mount's pass in the 39th minute.

Unfortunately, Oblak did not move when Giroud reacted swiftly to grab a wild ball that bounced off Mario Hermoso with an acrobatic shot to open Chelsea's lead in the 68th minute.

That advantage lasted until disbandment, providing important capital for Thomas Tuchel's team ahead of the second leg to host Atletico on 17 March. February 25 In History: Kepa Arrizabalaga Refuses To Be Replaced, Wild Speculation About Sarri Spreads Behind It 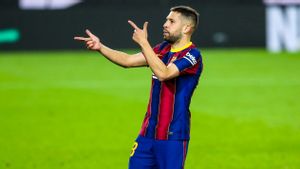 Giroud Is A Chelsea Hero, Tuchel: He Trains Like A 20 Year Old