Depak Madrid 2-1, Bilbao Against Barca In The Spanish Super Cup

Two goals scored by Raul Garcia for Bilbao can only be answered once by Real Madrid through Karim Benzema, according to an quote from Antara from the official website of the RFEF.

Bilbao played boldly from the start and were able to open the scoring when Dani Garcia sent a through ball that the Real Madrid defense couldn't anticipate.

Raul Garcia who greeted him coldly to trick goalkeeper Thibaut Courtois to bring Bilbao the lead in the 18th minute.

Real Madrid tried to retaliate, but their efforts were fruitless and Lucas Vazquez then violated Inigo Martinez's fall inside the area in the 37th minute so referee Juan Martinez Munuera immediately pointed to the spot.

Raul Garcia faces a penalty who returns to his composure to outwit Courtois and double Bilbao's lead.

Five minutes into the second half, Ferland Mendy fell inside the Bilbao penalty box after coming into contact with Ander Capa, but both the referee and VAR ignored the incident.

In the 54th minute Iker Muniain almost enlarges Bilbao's lead, but his header is off target.

Four minutes later, it was Real Madrid who spread threats but Marcos Asensio's shot was still over the crossbar.

In the 73rd minute Los Blancos' hard work finally paid off when Benzema was able to complete the pass and netted the ball into Bilbao's goal, although the linesman had raised the flag for offside.

After consultation with VAR, the referee finally approved the goal and Real Madrid tried to build up the momentum of the revival.

Benzema hit Bilbao again in the 82nd minute and the linesman again raised his flag, but this time the French striker was already caught offside.

Three minutes from normal time, captain Sergio Ramos came close to leveling it but his header was off target.

Drama continued to culminate into the seventh minute of injury time when Ramos fell into the Bilbao penalty box hoping for a penalty, but after consulting VAR, the referee ignored the request and locked Bilbao's move to the final.

The final will be played on Sunday, January 17, in which Barcelona has the opportunity to sharpen the record for the most number of Spanish Super Cup trophies that they already have.

Meanwhile, Bilbao has the opportunity to add to their collection of two Spanish Super Cup trophies. Atletico Eliminated By Cornella's 3rd Division Team In The Copa Del Rey, This Is Simeone's Reaction 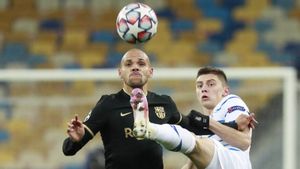