JAKARTA - Yonex Thailand Open will play a quarter-final match on the fourth day, Friday, January 15, and six Indonesian representatives will fight for tickets to the semifinals.

In head to head, the two pairs met only once at the 2019 French Open. With this advantage, Praveen / Melati as the fourth world rank could easily pass them, especially since their opponent was in 28th place.

During the day, the men's doubles Leo Rolly Carnando / Daniel Marthin will try their luck in qualifying for the first time in the quarter-finals of the Super 1000 tournament. The young pair will fight against British pair Marcus Ellis / Chris Langridge.

Anthony Sinisuka Ginting as the fifth seed will face Danish representative Rasmus Gemke. This will be their second meeting after the last time the two met in the first round of the All England 2020. At that time, Ginting who was superior in ranking had to be eliminated after being beaten by Gemke in two straight games.

Mohammad Ahsan / Hendra Setiawan will fight in the afternoon match against South Korean representatives Choi SolGyu / Seo Seung Jae. In head to head, SolGyu / Seung Jae won 1-0 when they beat The Daddies in the final of the 2019 Hong Kong Open.

Jonathan Christie, who came as the sixth seed, faces a tough test as he will challenge the fourth seed from Denmark, Viktor Axelsen. Of the total five meetings between the two, All England 2020 Champion Axelsen was recorded to be 3-2 ahead. Their last meeting took place at the 2019 French Open which was won with two straight games by Axelsen.

The only representative of Indonesian women's doubles, Greysia Polii / Apriyani, will close the match on the fourth day against the Malaysian pair, Tan Pearly / Thinaah Muralitharan.

Greysia / Apriyani who are superior in ranking should be able to overcome their opponents, especially Greysia / Apriyani are also winning 1-0 based on their meeting record when they posted a victory at the 2020 Malaysia Masters.

The following is the schedule of Indonesian representatives at the Thailand Open on the fourth day (in WIB): 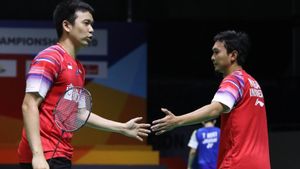 Ahsan / Hendra Passed The First Round Of Thailand Open II