Anticipate The 'Tos-tos' Round, Spanish National Team Players Are Claimed To Have PRACtically 1000 Penalti Before Arriving In Qatar

JAKARTA - The Spanish national team seems to have prepared themselves if they have to face a penalty shootout situation at the 2022 World Cup. La Furia Roja had already done a penalty practice before they set foot in Qatar.

This was conveyed by the coach of the Spanish national team Luis Enrique. He admitted to giving his players homework in the form of practicing 1,000 penalties to prepare for the World Cup.

The 2010 world champion team will face Morocco in the round of 16. They were overshadowed by additional round opportunities and penalties in the knockout stages of the tournament in Qatar.

Spain beat Switzerland on penalties at Euro 2020 but they were eliminated through an Italian-like mechanism in the semifinals.

"One year ago, in one of the Spanish camps, I told them to arrive here with at least 1,000 penalties", Enrique said as quoted by Antara via AFP, Tuesday, December 6.

"I hope they have finished their homework. If they wait until they arrive here to practice the penalty... (it won't be enough)," he continued.

The Spaniard insisted that the penalty kick was not a lottery lottery. According to him, it was a moment of maximum pressure.

"Time to show your courage, and that you can shoot a penalty in the way you have decided," said the former Barcelona coach.

"It really describes every player. It can be trained, arranged, how you set the pressure. The less you get the goalkeeper has a bigger influence."

"We have excellent goalkeepers, the three of them can handle this situation well. Every time we finish training I see a lot of players practicing penalties," he continued.

The Spaniard also answered criticism about his team's style of play, which often plays the ball in defensive areas that often put pressure on dangerous areas.

This was evident when they lost 1-2. The Japanese first goal came after the European team lost the ball near the penalty box and Ritsu Doan found their net.

"Every team has their weapons," said Enrique. "We want to bring the ball as best we can forward. If we have to play a long ball, we will. The interpretation must be done on the pitch." Separating League 1 And League 2 Match Operators Is Not Just Technical, But Also A Business Issue 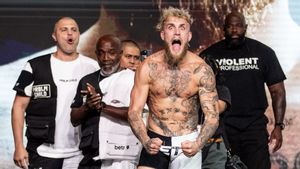 Jake Paul Aligned With Muhammad Ali, Is No Wonder? Dustin Poirier Predicts McGregor Vs Chandler Fight: Both Have The Chance To Be A Living Punching Bag The Threat Of African Babi Fever Is Still High, The East Nusa Tenggara Provincial Government For Inter-Island Babi Delivery Even Though For Customary Affairs Officers, Drivers, And Kernet's Regency In Bima NTB Increased In The Piles Of Ampas Padi