YOGYAKARTA - Maraton is one of the sports in the running competition. Marathon sports are now not only popular for competitions, but have often been an event for the community. Although the marathon running distance is very far, this sport is quite popular with many people.

There are four different types of marathon running distances. You could say marathon running is a tough sport compared to other running sports. Marathon participants must have strong fitness and stamina.

The race was held in an original Olympic match held from 776 BC to 393 M in Olympia, Greece. But running at that time was not long distance resilience, but fast running and other running events.

The first marathon race was held at the beginning of the modern era of the Olympics in 1896. The marathon is 40 kilometers long or about 25 miles long. This tempub distance is the same as the distance passed by the Greek envoy the myth of Pyudippides from Marathon to Athens in 490 BC. He did it to convey news of the victory of the Greek troops over the Persian invasion.

In 1897, a Boston Marathon was held for marathon running. This marathon sport is the world's oldest annual marathon event and one of the most prestigious events for runners.

The marathon ran a distance of 26.2 miles or 42 km. The distance is used in an official match by the World Athletic Federation. Why should the marathon run as far as 42 km? It turns out that this distance has also a history of the British royal family.

The marathon distance was initially only about 25 miles or about 40 km. This distance was used in the first modern marathon in 1896. The distance changes began when Queen Alexandra from England asked the marathon competition to start in the grounds of Windsor Castle so that children could watch from their baby's room, and finish in front of the royal box at the Olympic stadium. The distance traveled is 26 miles or 42 km.

The 42 km long distance was later officially designated as a new marathon running standard in 1921. Since then, the Olympic marathon has used the distance that far.

Running a marathon with a distance of 42 km takes about 4 to 5 hours for some runners. However, if runners do not have strong stamina and take a break in the middle of running, then the finishing time can be longer.

That is the distance of marathons and its long history since the Greek era. If you open marathon running athletes, now you can take part in many marathon events to be able to feel the long run. 2022 World Cup: US Gasak, Netherlands Waiting For The Winner Of The Argentine Vs Australian Match The 2022 World Cup EndsASTER For Gabriel Jesus And Alex Telles The Initial Position Or Position Of Candle Attitude Is Telentang: Know The Order Of The Movement 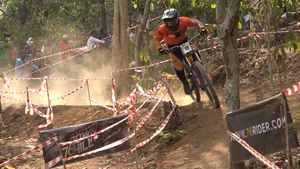 So Venue 76 Indonesian Downhill 2022, Ternadi Bike Park Has The Most Extreme Obstacle In The Country