BANGKOK - India won the Thomas Cup through a 3-0 victory over Indonesia in the final which took place at the Impact Arena Bangkok, Thailand.

In this way, India also made history for the first time in winning the Thomas Cup title, and became the sixth country ever to win the most prestigious men's team badminton tournament in the world.

Quoted from Antara, the Thomas Cup trophy was previously only held by five countries, namely Japan and Denmark with one each, Malaysia five times, China 10 times, and Indonesia has won the most with 14 times.

Indonesia's struggle in the final round of the 2022 edition was stopped in the third party, which was played by Jonatan Christie's men's singles.

Previously, in the opening match, Anthony Sinisuka Ginting lost the rubber game against Lakshya Sen with a score of 21-8, 17-21, 16-21.

In the match which became their second meeting, Ahsan/Kevin acknowledged the superiority of their opponent who had superior power.

Despite their best efforts, Rankireddy/Shetty proved to be a tough opponent to beat. Ahead Of PSIS Semarang Vs Persik Kediri, Both Are Looking For Three Points In Identity 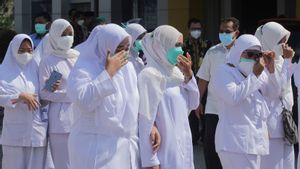