JAKARTA - The Belgian national team lost to Morocco in the second match of Qatar's 2022 World Cup group stage. The Red Devils surrendered with a score of 0-2 when both teams played at Al Thumama Stadium, Sunday, November 27.

This result makes the competition in Group F even more heated. An additional three points put Morocco at the top of the table with four points, one point ahead of Belgium.

The first half was tight. Belgium had more possession of the ball, but they struggled in terms of finishing.

Belgium fired six shots, but only two were aimed at the goal. Unfortunately, those two efforts still did not produce a goal.

The Red Devils continued to press in the first half. While the Atlas Lion occasionally counterattacked.

Morocco supporters cheered for the goal scored by Judge Ziyech in the extra minutes of the first half. However, immediately that joy disappeared.

The referee decided the goal was invalid because it was offside before the goal occurred. The referee took the decision after seeing the VAR show. The 0-0 score lasted until the break.

In the second half, the game became more interesting. Morocco is more daring to carry out attacks. The match is even more open.

The two teams responded to threats at the beginning of the second half. Starting with Ziyech which Eden Hazard replied to. However, the goalkeepers of both teams were still alert in securing the goal.

Dries Mertens, who had just entered the second half, also threatened Morocco's goal. However, again, goalkeeper Munir was still able to thwart it.

The awaited goal was finally created. Atlas's lion opened the scoring in the 73rd minute.

The substitute, Abdelhamid Sadasi, tricked goalkeeper Thibaut Courtois with a sensational free kick. Unlike Ziyech, Sasasi's goal was not disallowed by the referee.

Belgium coach Roberto Martinez immediately responded to the goal by bringing in two new powers. Charles De Ketelaere and Leandro Trossard entered in the 75th minute to further revive the power to break down his team.

Romelu Lukaku, who had just recovered from injury, was also played. The Inter Milan player entered in the 81st minute.

However, Belgium still could not find the goal against it. Instead, their goal conceded again in the final minutes of the match.

Starting from Ziyech's movement, the ball was then given to Zakaria Aboukhlal. Calmly, the player who also entered the second half continued the ball with one touch and made Courtois helpless. The final score is 2-0 for Morocco. Schedule Of The Second Day Of Thailand Masters 2023: Putri KW And Leo/Daniel Will Unjuk Capacity Not Wanting To Lose To Arsenal, Manchester United Also Brought In A New Midfielder Everyone Welcomes Jorginho To Arsenal With Open Arms 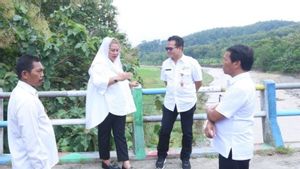 The Mayor Of Semarang, Ita Planning To Build Flats For The Relocation Of Dinar Indah Residents Locations For Flood Langganan DKI Approved That The Absorption Of The Financing Of The New Zero DP Was 43.3 Percent