Between Macedonia And EURO, Pandev: How Old I Am Doesn't Matter

JAKARTA - The aging player, Goran Pandev, stated that his age is not important after successfully leading the North Macedonia national team to the EURO 2020 finals thanks to a 1-0 victory over Georgia in the Playoff Line D final at Boris Paichadze Stadium, Tbilisi, Thursday local time (Friday WIB).

"I am very, very happy and emotional. We performed great and won a good victory for our nation," said Pandev in the post-match commentary video quoted by Antara from the official UEFA website.

"For all of us, being able to appear at EURO is a dream come true," he added.

Pandev became the only goal scorer that determined his team's victory over Georgia which made Macedonia their first appearance in the finals of an international tournament.

The Genoa forward praised his team-mates' performances and admitted that with the experience he has had, he has only played a role that is only natural.

"I just want to help my colleagues because this is a team full of young players. It's an extraordinary group that deserves this result," he said.

"I'm giving my all. How old I am is not important, because I've played this kind of match before. I have that experience."

"I talked to my team mates to stay calm and get the victory that is needed," concluded the 37-year-old player.

Pandev does have good experience at club level appearing in decisive matches including helping Lazio win the 2008/09 Coppa Italia, Inter Milan winning the Serie A, Coppa Italia and Champions League titles in 2010 and the 2011/12 and 2013/14 Coppa Italia together. Napoli.

Macedonia will be in Group C of EURO 2020 along with Austria, the Netherlands and Ukraine.

Macedonia will make their EURO debut against Austria in Bucharest, Romania, on June 13, 2021 before meeting Ukraine in the same venue four days later.

The Netherlands, meanwhile, will be their last opponent in Group C when they travel to Amsterdam on June 21. Bank Indonesia Encourages People To Use IDR 75.000 In Cash For Giving Holiday Allowance 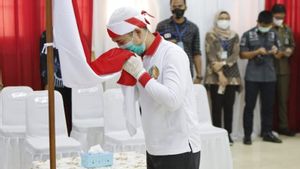 Haru Moment 34 Former JAD And JI Prisoners Kiss The Red And White Flag, Pledge To Be Loyal To The Republic Of Indonesia Appendix To The Study Of The Sale Of Dki Beer Stocks Only A Piece Of Paper, DPRD: Kayak RT-RW Aja Pak Anies! Tourism Opened, Impact Of Homecoming Ban Believed Not As Severe As Last Year