SEMARANG - Polrestabes Semarang, Central Java, took action against two restaurants in this area who were determined to violate operating hours during the implementation of PPKM level 1.

Head of Criminal Investigation Unit of Semarang Polrestabes AKBP Donny Lumbantoruan, said that the two restaurants, namely Marabunta and Holywings, which are located on Jalan Cenderawasih in the Semarang Old Town complex, violated their operating hours and the number of visitors allowed.

According to him, the managers of the two restaurants were charged with Law No. 4 of 1984 concerning Infectious Disease Outbreaks.

During the action, the police secured a number of evidences, such as bill paper prints, CCTV footage, and data on the PeduliLindung application installed in both places.

Officers immediately put up police lines at the two restaurants that had been sealed.

According to him, entertainment venues and restaurants are required to comply with health protocols and operating hours.

"It turned out that last night violated again, immediately actioned," he said. 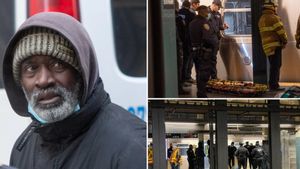