JAKARTA - The mouth of Jesayas Banari continued to say a prayer while clasping his hands together. When his eyes began to close, two women brought a vessel and sat cross-legged in front of the Governor of Central Java Ganjar Pranowo and his wife, Siti Atikoh.

“Mountains and headlands are witnesses to how our dreams are accomplished. The sea and the strait are not obstacles that you (Ganjar) are our family. Anyone who has entered Hibualamo is not provided with an exit. And from now on, you are already in it," said Jesayas.

Hibualamo is a large home for the Tobelo Tribe. There are 10 sub-tribes living there, under a traditional institution. And Jesayas Banari became one of the elders of the Tobelo tribe.

"This is an expression of our hearts. You Yaihoro or this foot-washing ceremony is the outpouring of our hearts. Don't turn back, father, if the horizon doesn't move home," he said.

You Yaihoro wasn't just given. Only given to selected people to be part of the Tobelo family. Ganjar did not expect that last Saturday, October 16, he would receive a foot-washing ceremony or an honorary award.

Not only as a family, Ganjar that afternoon was also given a machete and Salawaku. It is a kind of tool of war which means the appointment of Ganjar as a knight of Tobelo.

“Some time ago our children conveyed the traditional clothes that you now wear, they are handmade by Tobelo. And today, for whatever reason, you can be present in our midst,” said Jesayas.

Ten elders of the Tobelo sub-tribe were present to witness the you yaihoro procession. Even the women and youths of Tobelo did not want to miss giving their welcome. They were the ones who welcomed Ganjar from the gate to sit on the Hibualamo veranda.

Governor Ganjar Pranowo did not expect to be ordained as a member of the Tobelo Tribe. All this time he had only harbored a dream, when he would have the opportunity to visit Tobelo, a sub-district city in North Halmahera Regency which is famous for its gold mines.

He kept the dream after some time ago he had guests from North Halmahera, who delivered a set of traditional Tobelo clothes.

And the opportunity came after Ganjar was invited to attend the XXVI National Tilawatil Quran Selection in Sofifi City, North Maluku. Ganjar also decided to set aside a three-and-a-half-hour journey from Sofifi to Tobelo.

“My wife and I feel proud to be present in the middle of Panjenengan. This is how God brought us together. And this is how we take care of Indonesia,” said Ganjar.

Once the ritual procession is over, the music for the Meyasa Dance is played. The elders immediately came down to dance. Not wanting to be left behind, Ganjar and his wife immediately participated in the local Meyasa dance. 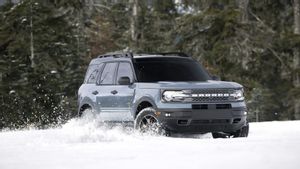 Manchester United Wins Against Palace, Rangnick Admires The Stamina Of His Players Damaging The Good Name Of The Police, Commission III Of The DPR Asks Bripda Randy Bagus To Be Sentenced To The Maximum Celebrating Mother's Day On December 22, These 2 Indonesian Films Are Ready To Make You Move