MTs Students In Ciamis Who Were Swept Away In The Cileueur River Have Been Found, 11 People Died, 10 Others Survived

JAKARTA - The Search and Rescue Office conveyed that all students of MTs Harapan Baru who were swept away in the Cileueur Leuwi River, Cijeunjing District, Ciamis Regency, West Java have been found, with details 11 students died and 10 people survived. have not been found, all victims have been found, and evacuated, in accordance with the number data submitted by the school," said Head of the Bandung SAR Office Deden Ridwansah through a press release received in Ciamis, reported by Antara, Saturday, October 16. He conveyed that all the student data that were carried away were 21 people, consisting of 11 people who were found dead, and 10 people survived, two of whom underwent medical treatment at the hospital. The joint team that was deployed to the field, he said, had carried out the process of sweeping and evacuating all victims who were reported to have drowned after crossing the Cileueur Leuwi River, Wetan Hamlet, Utama Village, Cijeunjing District, Ciamis, Friday, October 15.

Until 23.30 WIB, said Deden, his staff along with all other joint SAR teams remained on standby and coordinated with the police, schools, Ciamis Regency Government, and the victim's family until it was decided that the search process was complete and closed. Previously, based on reports in the field that the activity involved 150 students for activities along the river in Wetan Hamlet, Main Village, Cijeunjing District, Ciamis. But suddenly a number of students were carried away by the river and drowned, causing fatalities 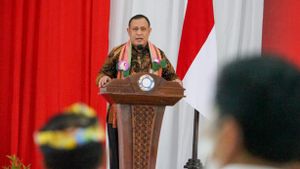 Firli Bahuri: No More Corruption Regarding Investment And Business Permits! Indoors Without Ventilation, These 7 Ornamental Plants Can Thrive