JAKARTA - PDIP has opened its voice about Rocky Getung who branded Puan Maharani and Ganjar Pranowo stupid for millennials for not expressing various dictions in the new grammar of world's politics.

Wanto Sugito, chairman of the PDI-P of South Tangerang, considers Rocky's thinking shallow and low in wisdom. In fact, Rocky is considered a fool himself.

"Rocky Gerung's statement actually makes a fool of himself. In eastern culture, the smarter a person is, the more humble and polite he is. Rocky, as his name implies, is just an intellectual boxer, who commercializes his thoughts, not using ideas to improve the nation's civilization," said Wanto in his statement, Saturday. , October 16.

According to Wanto, the diction that Rocky Gerung uses to measure intelligence comes from the West. In fact, according to him, the understanding of Indonesian politics is far more advanced with the principle of gotong royong.

"Gender equality is inferior to the principle of nationality which is the soul of the spirit of unity. In this principle of nationality, not only gender is equal, but also ethnicity, religion, social status, all citizens are equal. So Indonesia is far more advanced in its political understanding. Especially in matters of human rights. "Indonesia is more advanced than the UN Charter because Indonesia's independence is to build a world free from all colonialism," he explained.

Therefore, Wanto thinks that Rocky is the one who doesn't understand political diction in Indonesia. In fact, he said Rocky Gerung illustrates the presence of parasites in politics.

"Rocky should only be an intellectual fighter, a fighter with words. That's why seeing Rocky Gerung, don't use ethics and morals. Especially wisdom. Rocky Gerung's words are important to describe the presence of parasites in politics," said Wanto.

For information, Rocky Gerung said that Ganjar and Puan are stupid figures for millennials. He concluded this after discussing with Indonesian millennials who live abroad.

"So it's ridiculous that we are trying to increase Ganjar Pranowo's electability, even though millennials are stupid people. Likewise, Ms. Puan. Same, they think that people don't understand the new grammar of the world's politics, namely gender equality, democracy, human rights," said Rocky in a virtual discussion, Friday, October 15th. 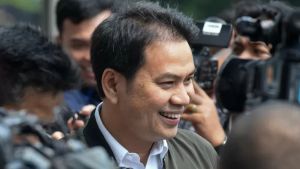 Celebrate International Day Of Persons With Disabilities, Shinta Priwit And Tony Q Rastafara Work On The Song Woyoo... Definitely Can Officials Asked To Report Wealth, Deputy Chairman Of KPK: If You Don't Want To, It's Better To Stop!