Many Urge To Withdraw For The Tangerang Prison Fire, Yasonna Laoly: Let's Just Take It Easy

JAKARTA - The Minister of Law and Human Rights, Yasonna Laoly, responded casually to the pressure to withdraw from a number of parties after the Tangerang Class I prison fire incident.

"We are taking it easy," said Yasonna at the DPR Building, Tuesday, September 21.
The PDIP politician added that his party is forming a team of psychologists to help the fire victims.
"Because the trauma was so severe, we did that, 48 have been returned to their families, buried. We all bear the costs, including our compensation has been paid, only one foreigner has not yet. We are waiting for what from the country concerned in Nigeria if they say bury it here or cremation we will do," said Yasonna.
Previously, Member of Commission III of the DPR from the National Mandate Party (PAN) faction, Syarifuddin Sudding, suggested that the Minister of Law and Human Rights (Menkumham) Yasonna Laoly resign from his post following the fire incident in the Class I prison in Tangerang, Banten on Wednesday, September 8, in the early hours of the morning.

"If he has a moral responsibility, I think he should resign. If he doesn't, I think the president should evaluate Yasonna's performance," said Sudding when contacted, Thursday, September 9. The reason, continued Sudding, was Yasonna's responsibility as the head of the Ministry of Law and Human Rights. "Don't feel as if responsibility has been transferred to the Kalapas (Head of Prisons) or the Director General of Corrections. However, Yasonna as the policy controller must take full responsibility for this humanitarian tragedy," said the PAN politician. 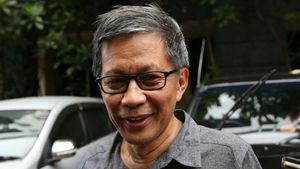 Sharp Once! Rocky Gerung Suspect That Jokowi-Sri Mulyani Got Whispers Of A 'shaman' Until They Insisted On Building A Fast Train President Jokowi's Orders To SOEs: If We Want To Quickly Adapt, Partner With Global Companies Talking About Baim Wong's Content After Going Viral With Grandpa Suhud, Uus: People Like To Watch His Sadness