"Visitors who come must be guaranteed safety and comfort, so infrastructure must support this", he said in Kupang, quoted by Antara, Tuesday, August 3.

This statement was made by Viktor in response to UNESCO's request to the Indonesian government to stop all tourism infrastructure development projects in the Komodo National Park area in West Manggarai Regency, East Nusa Tenggara.

The request is contained in the UNESCO World Heritage Committee document numbered WHC/21/44.COM/7B which was published after the online convention on July 16-31, 2021.

Governor Viktor expressed his gratitude to UNESCO for taking part in paying attention to state assets, especially the Komodo National Park which is a nature conservation area, and also the pride of NTT.

However, he said, it should also be noted that what the Indonesian government has done and has agreed with President Joko Widodo to help make Komodo National Park has great economic benefits for NTT.

He hopes that UNESCO also understands that what the government is doing is to protect the habitat of Komodo dragons and also protect marine life and all-natural resources so that they are not damaged by irresponsible people.

"Parties who may not agree with what the Central Government and the NTT Provincial Government have done so that they can conduct further research and also discuss with us", he said.

Governor Viktor further explained that the government has decided to organize the islands and seas in the Komodo National Park area, including Rinca Island as a mass tourism location.

"Rinca Island is also a habitat for Komodo dragons and by being designated as mass tourism, of course, we need to develop it", he said.

Therefore, on the island of Rinca temporarily built a place for pedestrians so that they are safe and also built a suitable dock for visitor boats.

Governor Viktor hopes that the results of the development of KNP will be able to boost the economy of the local community.

"So their economy grows from tourism which develops as well as from the arrival of visitors which has an economic impact", he said. 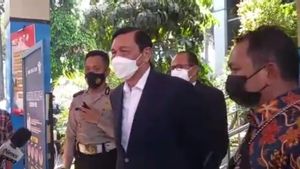 Medan Merchant Extortion Thugs Who Shouted 'You Call All The Police Officers, I'm Not Afraid' Arrested By The Police East Kolaka Regent-Head Of BPBD Suspect Of Infrastructure Project Bribery, KPK Reminds The Importance Of Auctions So No Tributes TNI Evacuates Two Teachers And One Kiwirok Resident To Jayapura