SUMBAR - The Regent of West Pasaman, West Sumatra, Hamsuardi, has threatened to close the PT Berkat Sawit Sejahtera (BSS) Simpang Tiga Alin palm oil mill. It is suspected that the waste from the factory polluted the river near the factory site.

"Indeed, there have been public reports about allegations of leaking waste. Wastewater leaked into the Batang Alin River causing fish to die", he said at Simpang Empat, quoted from Antara, Tuesday, August 3.

To ensure this, the Regent of West Pasaman immediately went down to the field and saw the alleged leaked waste. He also asked the company not to dump the wastewater directly into the river.

He asked the public to monitor the company's operations. If there are discrepancies, immediately submit a report so that the regional head can follow up.

"Not only PT BSS. All companies in West Pasaman I ask for an orderly rule. Don't let anyone violate it. If it violates, it will definitely be a problem", he said.

He hopes that in the future there will be no more environmental pollution problems by the company. Not only these aspects, but relations with the community must also be well established.

"Closing companies that do not comply with the rules is the President's instruction. If there are companies that violate, we will close them. We can invest, but don't destroy them", he said.

Meanwhile, Public Relations of PT BSS Simpang Tiga Alin, Gunung Tuleh Marjohan District, when confirmed, confirmed that factory waste had reached the river causing fish to die. However, it is not sewage pollution but there is a leaking sewage pipe so that the wastewater flows into the river.

"It happened on Friday night at around 19.00 WIB. There is no intentional element in this", he said.

Regarding the leaking pipe, his party has repaired the pipe. Even the Environment Agency has checked and found that the leaking pipe was not intentionally dumped into the river.

"For dead fish, we will replace them with fish seeds because the river is a prohibited fish river. In fact, the company's form of participation since 2017 has always provided fish assistance of IDR 30 million per year", he said. 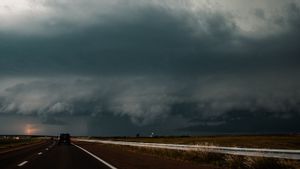 The Easiest Explanation To Understand Sunny Mornings And Rainy Evenings