There Is No Certainty Regarding Quotas, The DPR Recommends Postponing The 2021 Hajj Implementation

JAKARTA - Deputy Chairman of Commission VIII of the House of Representatives Ace Hasan Syadzily asked the Indonesian government in this case the Ministry of Religion to be more proactive in obtaining information regarding the certainty of the 2021 Hajj implementation. If this is not possible, it is better to postpone the implementation this year.

The reason is that the Saudi Arabian government has not officially announced the provision of hajj quotas for Muslim countries that will dispatch pilgrims. Including requirements on vaccines and quota allocation for the country.

"Therefore, I think the government must be proactive to ensure that information regarding the implementation of this pilgrimage is immediately obtained," said Ace at the Parliament Complex, Senayan, Jakarta, Wednesday, June 2.

According to him, the issuance of the WHO's approval of the Sinovac vaccine would certainly make Indonesia relieved. That way, all parties should have no doubt that Sinovac is a vaccine that can be used in an emergency for the people of Indonesia, where most of them have already used the vaccine.

"Yes, even if Indonesia is given a quota for Hajj by Saudi Arabia, of course we welcome it. However, it must be ensured that the vaccine problem is no longer a problem for us," he said.

Ace said that there is no certainty if Indonesia does not get the 2021 hajj quota, including the question of 11 countries that are allowed to enter Saudi Arabia. However, it is also not known whether there are other obstacles besides the vaccine problem which is the reason for Indonesia's delaying the pilgrimage this year.

"Of course it is the authority of the Saudi Arabian government. Yesterday 11 countries were given permission to fly into Saudi Arabia, it's not related to Hajj. It's more about their flight policies," he explained.

Even if the size is handling COVID-19, said Ace, the United States is no better than Indonesia. Even the UK has a new virus mutation from the outbreak.

"I take that example. So because of that we cannot measure that the policy regarding it is related to the handling of COVID-19," he said.

Therefore, the Golkar politician asked the government to continue to prioritize the health of the congregation. While waiting for certainty regarding the 2021 hajj quota.

"Even if given the opportunity to hold the pilgrimage, the health of the pilgrims must be guaranteed, including the health protocol while in Saudi Arabia," said Ace.

Referring to last year's announcement of the Hajj being carried out 10 days after Eid, Ace recommended that the government be realistic in prioritizing the safety and health of pilgrims.

"Instead of giving hopes, in fact we also can't give guarantees to them, it's better if we just be firm, it's better to postpone the departure," he said.

Previously, the Minister of Religion (Menag) Yaqut Cholil Qoumas emphasized that until now no country has received certainty about the quota for the pilgrimage to 1442 Hijriah/2021 AD.

According to Yaqut, the Saudi Arabian government has not announced certainty about the opening of the Hajj pilgrimage for foreign nationals and their quotas.

"There is not a single country in the world that has a hajj mission, which now has a hajj quota. Because the hajj quota depends on the Saudi government," Yaqut said, Wednesday, June 2.

Yaqut also asked all parties to wait for an official announcement regarding the implementation of the Hajj from the Government of Saudi Arabia.

However, the Indonesian government will also take a stand on whether or not to dispatch pilgrims.

"When it comes to the decision whether Indonesia will send the hajj or not, we will wait. In one or two days there will be a decision," he said. 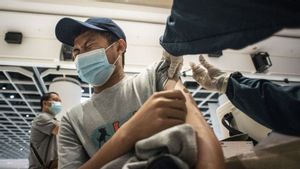 Household Relationships Are No Longer Romantic, Is It Reasonable? The Celebration Of State Officials At The Moment Of Athletes' Victory Is High, But Attention To Sports Development Is Rated Low