Fiscal And Monetary Synergy Is Expected To Boost Credit Demand

JAKARTA - Two institutions that are members of the Financial System Stability Committee (KSSK), namely Bank Indonesia (BI) and the Ministry of Finance (Kemenkeu) hope that the policies issued can encourage credit demand in order to accelerate the process of economic recovery.

BI Economic and Monetary Policy Department Executive Yoga Affandi said that the party remains concerned about carrying out the function of monetary stability with a focus on maintaining liquidity in the market. According to him, this effort is quite important in stimulating consumption activities in society.

However, the central bank's monetary policy must be supported by fiscal expansionary measures to boost demand from the side. So, it is hoped that credit demand will be created as a result of the moving of the economy.

"The policies of these two institutions are actually complementary. "For better results, of course BI will continue to maintain communication with the Ministry of Finance regarding what further strategic steps can be taken to support recovery," he said in a webinar today, Wednesday, February 24.

Yoga added that Bank Indonesia had taken steps to lower the benchmark interest rate by 25 basis points to 3.50 percent from 3.75 percent previously. The monetary authority also sets the Deposit Facility interest rate at 2.75 percent, and the Lending Facility rate at 4.25 percent.

VOI noted that throughout 2020 Bank Indonesia had lowered the benchmark interest rate by 125 basis points. Meanwhile, this is the first cut in 2021. So, starting from January 2020 to February 2021, the central bank has lowered interest rates by 150 basis points.

"This is proof that BI is still maintaining loose liquidity at this time," he said.

The banking industry responded responsively to this reduction in interest rates by dropping the 1-month deposit rate by 181 bps to 4.27 percent in December 2020.

However, a different approach occurred with a limited downward trend in credit interest rates, by 83 bps to 9.70 percent throughout 2020.

"We see the slow decline in credit interest rates due to the factor of the still high prime lending rate (SBDK) of banks," he said.

"So we, Bank Indonesia, encourage the banking industry to quickly transmit the reduction in interest rates to credit, so that the intermediation function can be improved to encourage recovery," Yoga concluded. 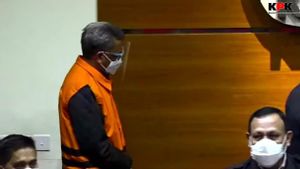