Jokowi Is Desperate To Go To The Rice Fields When It Rains Hard In NTT, This Is The Palace Explanation

Head of the Press, Media and Information Bureau of the Presidential Secretariat, Bey Machmudin, explained that actually, the presidential assistant had warned of bad weather conditions at the location.

"Yesterday when the President came with heavy rain, the presidential apparatus had reminded the president not to go to the blue square water pump. But the President still wants to see the water pump directly because it is the key to the food estate in that location", Bey told reporters. Wednesday, February 24th.

Bey said the reason for Jokowi to go straight in was because he wanted to make sure the water pump was functioning properly. The condition became crowded because many people called Jokowi from the edge of the rice fields.

"They were calling and had waited a long time and the rain was raining. So the President wanted to greet him from a relatively closer distance", explained Bey.

Actually, Paspampres was on standby from the start around Jokowi. It's just that, the rice field path makes their space limited.

"There is a Paspampres, but it cannot run first, because the road is only for one person. If the Paspampres is first, the President cannot get to the very end", he said.

Jokowi visits the food estate in Central Sumba, Tuesday, February 23. Food estate is one of the government's programs in food security.

"But in the future, it will be expanded again to an area of 10 thousand hectares, which will be divided by 5,600 hectares for rice and 4,400 hectares for corn", said Jokowi. 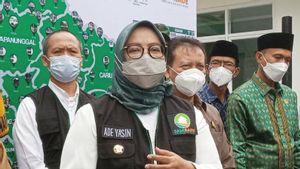