JAKARTA - The office of the Governor of Central Java, Ganjar Pranowo, in the area of Jalan Pahlawan, Semarang City, and several points were submerged by floods after two hours of heavy rain.

Ganjar Pranowo said that he was the most guilty of this incident. This was conveyed by Ganjar when answering responses from netizens about floods in Semarang.

"If want to Pak @ganjarpranowo you can blame the mayor and then blame the water sent by Ungaran Hahahahaha😂", said aditya_susanto as quoted on Wednesday, February 24.

So this is where Ganjar said that he was the one who was most guilty about the flood. "I was wrong, The others have worked well", said Ganjar on his Twitter account @ganjarpranowo.

It is known that heavy rain that fell for approximately two hours on Tuesday, February 23 evening caused flooding in part of the Central Java Governor's Office complex, causing inundation in the office yard, 1st floor of Building B, and the hallway connecting Building A.

Ganjar thinks this flood is strange. "It's a bit strange, when I was still in Kudus the condition of the office was flooded, strange in my opinion because in the parking lot the water could not come out, it was impossible for sure something was clogged", he said after checking on Tuesday, 23 February, evening.

After checking, he said that the embankment from the fence of the Central Java DPRD (Regional House of Representatives) building project and sedimentation in the waterways were factors causing flooding in the Central Java Governor's Office complex.

Ganjar has asked the project manager for the construction of the Central Java Provincial DPRD building not to build embankments in the project fence area.

He also ordered the Public Works Agency to dredge sedimentation in the waterways behind the governor's office.

"Earlier I asked that tonight the garbage be dredged, the sediment is dredged out. I am afraid that it does not appear that what gets in there is blocked or not", he said. Report To Sir Anies! There Are Naughty At Tanah Abang Market, Not Traders But Participating In COVID-19 Vaccinations Sadist! Youth In Aceh Stabbed Mother And 3 Her Child To Death, The Cause Starting From Coffee And Cigarettes Optimism Of BUMN Karya With The Presence Of SWF Kaesang's Clarification On His Broken Relationship With Felicia Tissue 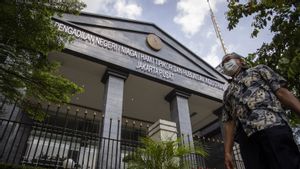 Juliari's Subordinates Reveal Proposers For Social Assistance Package Providers, One Of Which Is Marwan Dasopang