JAKARTA - The Corruption Eradication Commission (KPK) summoned three witnesses in the bribery case. The three of them were examined as witnesses for the former Minister of Maritime Affairs and Fisheries Edhy Prabowo, who was a suspect in receiving bribes in this case.

The three witnesses summoned were private employees I Ketut Lila Buana and Noer Syamsi Zakaria as well as the Director of Mitra Jaya Persada Sudiarto.

It is not yet known about the subject matter of the investigation by the investigator. However, these witnesses are suspected of knowing about the bribery case at the Ministry of Marine Affairs and Fisheries.

Meanwhile, the giver of the bribe was the Director of PT Dua Putra Perkasa Pratama (PT DPPP) Suharjito (SJT).

Edhy was named a suspect because he was suspected of accepting bribes from companies that had been issued a lobster seed export license using a forwarder company and were kept in one account up to Rp9.8 billion.

This money is allegedly used by Edhy and his wife to shop for luxury goods, including during a visit to Honolulu, Hawaii, United States before being caught in a hand arrest (OTT) operation. 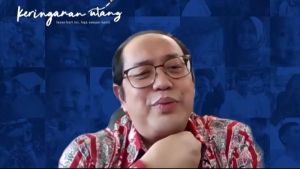