Cleaning The Bhayangkara Corps Of Drugs, Waiting For The Regional Police To Hold Mass Urine Tests For Its Members

This instruction came after the Police Chief of Astana Anyar, Bandung City, Police Commissioner Yuni Purwanti Kusuma Dewi and 11 members were arrested for being involved in drugs.

General Sigit's order was contained in the Chief of Police's telegram letter number ST / 831 / II / HUK.7.1 / 2021 dated February 19, 2021. The telegram was signed by the Head of the Police's Division of Professional and Security (Propam) Inspector General Ferdy Sambo.

In the telegram letter, there were at least 10 instructions that the Kapolda had to carry out. One of them ordered members who keep, distribute, consume or be involved in drug organization networks to be punished.

Those who facilitate or abuse the authority of their office to support drug trafficking should also be given severe penalties. This is because the National Police will not tolerate the involvement of members in drug cases.

"Strict action in the form of dismissal and conviction in accordance with applicable legal provisions," wrote the instruction.

In the instruction, Listyo also asked all Kapolda to speed up the decision to dishonorably dismiss the personnel who had been disconnected and received the recommendation at the hearing.

Meanwhile, on the prevention side, Listyo asked the Kapolda and his staff to carry out early detection by carrying out investigations and mapping members who were indicated to be involved in drug cases.

Meanwhile, Commission III of the House of Representatives of the Republic of Indonesia who participated in responding to the Chief of Police's instructions hopes that all levels of the Police can implement it well. In fact, if deemed necessary, the Chief of Police will impose sanctions on members whose urine test results indicate drugs.

"Hopefully this urine test can be carried out regularly and can be an example for other institutions," said Deputy Chairman of Commission III Pangeran Khairul Saleh.

According to Pangeran, the police chief's policy of conducting urine tests on the ranks should be appreciated. Given that as law enforcement officers, police should stay away from drugs.

Moreover, he said, the case of Kompol Yuni using drugs with his members seriously tarnished the Bhayangkara Corps.

"(This case) seems to tarnish and slap the good name of the police corps. The police chief's policy is certainly commendable, as the front guard in facing the war against drug use," said Pangeran. 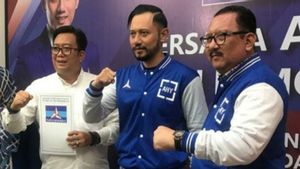 Artidjo Alkostar Dies, Mahfud: We Are Left Behind A Law Enforcer Full Of Integrity