Called The Next President, Ganjar Beda From Jokowi

JAKARTA - Central Java Governor Ganjar Pranowo is said to have a resemblance to President Joko Widodo. One of them is a fan of blusukan, so it's no wonder that many call Ganjar 'The Next President'.

But behind the similarities, there are significant differences between the two. Political observer Heri Budianto assessed that the difference lies in the typical personal behavior or political style. Jokowi is seen as calmer, cooler, and more careful in speaking than Ganjar.

"Ganjar is explosive, in the sense that its assertiveness appears in the field, it can be seen from the situation. For example, when there was an error in the field, whether it was on the weigh bridge, either in Samsat, now Ganjar did not hesitate to get angry directly at the location. Jokowi, "said Heri to VOI, Tuesday, February 23.

This firm attitude, according to Heri, is an added value for Ganjar as the right figure to replace Jokowi as president. Even so, the results still return to the hands of the people.

"Coming back to the people, it could be that Ganjar's differences seem more assertive, seen by the public, especially Jokowi's voters. So it is needed for future leaders," he said. 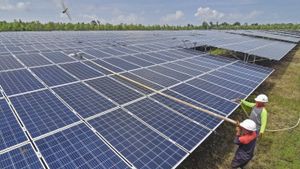