JAKARTA - More than 100 employees of the Central Bank of Myanmar, including employees from its head office in Naypyitaw and branches in Yangon and Mandalay, have joined the civil disobedience movement, resisting the Myanmar Military Junta.

An employee of the Central Bank of Myanmar who asked not to be identified said 80 employees in Yangon, 20 in Mandalay, and several in Naypyitaw joined the demonstration with the community.

“We don't want to work under a government that seized power through a coup. This is sheer injustice. I feel guilty working in an office casually, while the younger generation is on the streets, so I joined the movement", he told The Irrawaddy.

An employee in Yangon said he and his colleagues would not return to work until they have a government that matches the results of their choice in the election.

The Myanmar military itself is known to have replaced the Governor and Deputy Governor of the Central Bank as well as a number of Myanmar officials since the coup. Central Bank Deputy Governor U Bo Bo Nge, appointed by the National League for Democracy (LND) Party, is still in detention, although other bank officials have been released.

U Bo Bo Nge's family, who do not know his whereabouts, are worried about his health. Bo Bo Nge, who has heart problems and hypertension, was arrested by the military at his home in Naypyitaw on February 1 at 7 am local time.

His wife said the officers who picked up her husband wore military uniforms, calling the alumni of the School of Oriental and African Studies at the University of London, having to talk "briefly" with the military commander.

“I haven't received a word from him or the military. We don't even know his whereabouts”, said the wife of Daw Hnin Wai Lwin, who was also worried when her children asked where Bo Bo Nge was.

The reason for his arrest was not clear. However, he was a member of the LND Economic Committee, participating in the 1988 Uprising with pro-democracy activists that kept him in prison for several years. The Sorrowful Strains Of The Bagpipes Accompany Prince Philip's Funeral Joseph Paul Zhang, The Man Who Claims The 26th Prophet Is Being Hunted By The National Police And Interpol Criminal Investigation Unit Ridwan Kamil: Corruption Suspect Siti Aisyah Is Not My Brother-in-law How Jake Paul Became A Billionaire: From YouTube To Investing Bitcoin Far From The Octagon, McGregor Has A Noble Heart: Helps A Sick Woman To Donate Rp23.3 Billion Worth Of PPE 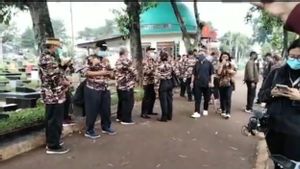