JAKARTA - The Director General of Foreign Trade, Didi Sumedi, said that the imposition of Temporary Safeguard Measures (BMTPS) for automotive products in the form of passenger cars and light commercial vehicles by the Philippines is contrary to international agreements.

The reason is, the arguments used by the Philippine authorities in the imposition of BMTPS are very weak and not in line with the agreement of the World Trade Organization (WTO).

"The Indonesian government has taken steps and will continue to formally submit objections and defenses to various forums for the imposition of BMTPS by the Philippines," he said in a press release Thursday, January 14, 2020.

Didi added that the Philippine authorities need to review the safeguard investigation which is currently still ongoing.

"It is hoped that this investigation will be stopped and the Philippines will not charge import duties for definitive safeguard measures," he said.

For information, the Philippines started a safeguard investigation on January 17, 2020 based on a request from the Philippine Metal Workers Alliance (PMA), a trade union whose members consist of a combination of workers in automotive companies in the Philippines. PMA claims to have suffered serious losses due to the surge in automotive imports in the 2014-2018 period.

Didi explained, based on BPS data, the export value of Indonesian passenger cars to the Philippines in 2017-2019 fluctuated.

"In 2017, passenger car exports were recorded at US $ 1.20 billion, in 2018 it decreased to US $ 1.12 billion, and in 2019 it increased slightly to US $ 1.13 billion. Through this data, it can be seen that there has been no significant increase in imports from Indonesia which is the basis for the safeguard investigation by the Philippines, "he said. Pak Mentan Syahrul, Said The Entrepreneur Of Soybeans, The Price Of Soybeans In The Field Is Still Expensive Mercedes-Benz Ready To Bring Electric Cars To Indonesia In 2021 Before Becoming The Pariwista Industrial Estate, Bintan Was The Largest Bauxite Producing Area In Indonesia 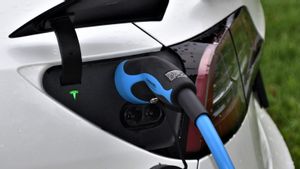 Manulife: Thanks To The Omnibus Law, Foreign Investors Are Flocking To Invest In Electric Car Batteries In Indonesia