JAKARTA - Syarif Rafiq (49) visited the JICT II Integrated Command Post to seek information about the whereabouts of his wife, who was the victim of the Sriwijaya Air SJ-182 plane crash.

Syarif's wife, Panca Widya Nursanti (47) is one of the 62 passengers and crew of the Sriwijaya Air SJ-182 aircraft. However, Syarif had not received any information that his wife had been found by the SAR team.

"The visit here is to seek clarification regarding the victim. Regarding the finding of my wife's belongings, we also don't know yet, just wait," said Syarif when met at Poso JICT II, North Jakarta, Thursday, January 14.

Syarif recalled his last meeting with his wife. His wife went to Tegal on 22 December to return to her hometown.

After vacationing in his hometown, the wife took a transit trip from Tegal to Jakarta and boarded a plane from Jakarta to Pontianak with Sriwijaya Air SJ-182.

Prior to departure, Syarif only met face to face via video call with Widya on Saturday, January 9 at 14.05 WIB on the plane before leaving.

Syarif had asked Widya to read a prayer for his safety. Because, at that time, the weather in Jakarta was raining.

"Our last communication before leaving was via video call at 2:05 p.m., he called and said that the weather in Jakarta was not good. So, I told him to read and read the prayers," he said.

Syarif's video call with his wife was the last communication, before Syarif heard the news that Widya's plane lost contact and was declared crashed.

Furthermore, Syarif admitted that he came from Pontianak accompanied by his cousin. He arrived in Jakarta two days ago, staying at a hotel facilitated by the airline Sriwijaya Air.

"All data regarding my wife have been entered, just waiting for more information," he added. Gerindra Politician Asks Rizieq Shihab's Case To Be Resolved With Restorative Justice, This Is The Explanation 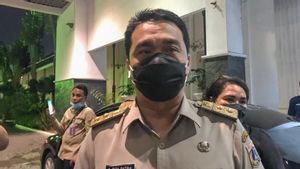 Not Accepting Anies Being Criticized By Gerindra Politician, Riza Patria: What Mr. Anies Has Done Is Extraordinary