JAKARTA - The search period for the SAR team's operation of the Sriwijaya Air SJ-182 plane that crashed around the waters of the Thousand Islands will end on Friday, January 15 tomorrow.

This refers to the provisions of Law Number 29 of 2014 concerning Search and Assistance, which states that the search for victims will last for seven days.

However, Basarnas Operations Director, Brigadier General TNI (Mar) Rasman said the search period could be extended according to search needs.

"The search operation will last for 7 days, but it can be extended based on the situation of interest," said Rasman at the JICT II Integrated Command Post, North Jakarta, Thursday, January 14.

Rasman said, the authority to determine whether operational activities were extended or not was in the hands of the Head of Basarnas, Marshal Madya Bagus Puruhito, taking into account the conditions in the field.

"Should it not be extended? Or does it need to be stopped? That is the leader's authority, of course with broad considerations. If we just carry out what the leader decides," Rasman said.

Rasman hopes that the search for Sriwijaya Air SJ-182 on the sixth day will be supported by friendly weather. Because, yesterday, the search by the SAR team was hampered by bad weather and high waves.

"Hopefully, we hope that the weather will be friendly today, if we look around Kuta it is quite cloudy and based on the weather forecast this morning that this morning there was light rain around Jakarta but sunny cloudy afternoon, hopefully," said Rasman.

With the expected weather to support the search and rescue of the SAR team, Rasman hopes the team can get maximum search results, both victims and aircraft materials.

There is also a search operation concept almost the same as yesterday. Deployment of air defense equipment to detect findings from a great distance. This is because Rasman predicts that both victims and material have been carried away after six days in the ocean.

"Since it has entered the sixth day, of course there are parts or victims that may have been carried away. Of course it might have been quite far away. Therefore, the search by air may be expanded. Likewise, on our beaches, we also optimize by the potentials that are available. "There are beaches on both islands and big islands," Rasman explained.

The SAR team also continues to carry out searches on the surface. Because, on the fifth day, there was a handover of the search object that was found because it was caught in the fishing net. This means that these parts also float on the surface of the water and are not all embedded in the seabed.

The main thing is subsurface search by diving. To date, there are 268 divers who have entered the search location with six sectors.

The focus of the search today is still the same as yesterday, namely the search for victims, aircraft debris, to the black box cockpit voice recorder (CVR) type. Meanwhile, a black box with a flight data recorder (FDR) type was found on Tuesday, January 12. 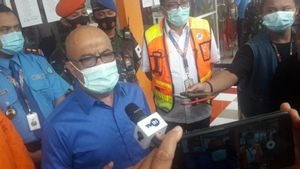 Polri: Pure South Kalimantan Floods Weather Factors Not Due To Exploitation Of Nature