Insecticides Are Not Effective In Eradicating Dengue Fever, Residents Are Asked To Be Diligent In Cleaning Up

"What is effective is that PSN beats the mosquito cycle, which usually occurs in border areas. Therefore, residents should be diligent in doing it," said Acting (Plt.) Deputy Mayor of South Jakarta Administration, Ali Murthadho quoting Antara, Tuesday, October 4.

Ali added that DHF cannot be eliminated, but mosquito larvae can be destroyed. Therefore, according to him, larva monitoring interpreters (jumantik) are the spearhead to ensure the reduction of dengue disease that attacks the region.

In addition, Ali said spraying smoke by spraying poison that kills adult mosquitoes or commonly called insecticides has not been effective in destroying mosquito larvae because fumigation only works to kill adult mosquitoes.

"As for the larvae, eggs, or mosquito larvae, it cannot be destroyed through this effort," he said.

"For this reason, people are encouraged to carry out PSN in their surroundings by implementing 3M Plus, namely draining, closing, and recycling," he said.

Previously, data from the Disease Prevention and Control Section (P2P) of the South Jakarta Health Service stated that there were 757 cases of dengue fever in the area from January to June 2022.

Previously, Spokesperson for the Ministry of Health, Mohammad Syahril, reminded the public that dengue does not only attack children but also adults, especially during the rainy season.

“Hopefully, people with this rainy season will be aware of the dengue fever that lurks around us. DHF does not only affect children, adults too, and if it is not treated quickly, it can be dangerous and cause death as well," he said during the Healthy Broadcast program which was broadcasted online, Monday, October 3. A Group Of Students DOING Brawls, The Police Actually Met 6 Youth Users Of Marijuana And One Bandar 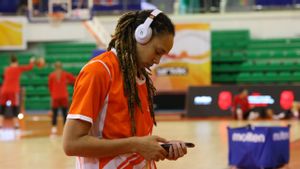 Reject! UAE And Saudi Arabia Show You 'benefit' In Connection With Russia To The US: Success In The 'Tukar' Britney Griner With Viktor Bout Attending The 2022 Hakordia Commemoration, Vice President: Corruption Is A Musibah The US Will Send Anti-Drone Air Defense Assistance To Ukraine Worth IDR 4.2 Trillion Taking Care Of Gakpo Waiting For An Offer From Manchester United Again: I Will Save It