JAKARTA - Presidential Chief of Staff Moeldoko asked all parties to prepare for the 2024 General Election and minimize potential disturbances. The challenge of the 2024 election is still a homework that must get the attention of all parties.

This was conveyed during the consignment implementation initiated by the Presidential Staff Office (KSP) together with related Ministries/Institutions to prepare narratives and public communication strategies ahead of the 2024 General Election, in Bandung, Wednesday 10 August.

"The implementation of the 2024 election is important for all parties to pay attention to. I don't want the problems in the previous election to repeat itself. At least we must be able to reduce the potential for these disturbances because we want to be a developed nation, ensuring the implementation of the democratic party properly," said Moeldoko in his remarks. .

Moeldoko's call refers to a number of polemics that occurred during the 2019 election. Starting from the distribution of election logistics that is not right on target, voter data that is not up-to-date, causing many people to lose their right to vote, to the issue of the workload of KPPS officers being too heavy.

In addition, money politics, the circulation of hoaxes on social media and invitations to abstain are also problems that often occur in the implementation of the Presidential/Vice-Presidential and Regional Head Elections.

Therefore, this cross-ministerial synergy is expected to be able to map out the challenges that have the potential to hinder the implementation of Indonesia's five-year democratic party.

“The success of the election is an integral part of improving the quality and consolidating our democracy. Commanded by KSP, this consignment was initiated as a means of discussion among fellow teams within the government. The goal is to map strategic issues and challenges for the 2024 General Election by learning from previous election events," added Moeldoko.

Later, one of the concrete results that will be realized through this consignment is the formation of a 2024 Election task force. This task force will have a series of cross-ministerial joint work focused on strengthening public communication.

Moeldoko also hopes that this task force in the future will be able to formulate solutions and recommendations to deal with various issues of holding the 2024 election.

For information, the consignment was attended by a number of representatives from Kominfo, Kemenkopolhukam, Kemenko PMK, Kemendagri, Kemenkominfo, TNI-Polri, BIN, Kemenag, and the National Cyber and Crypto Agency (BSSN). 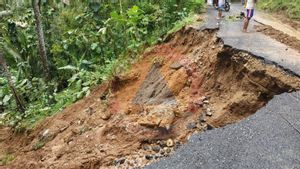